The 10,000 hp twin-screw ATB tug is classed by ABS as +A1 Towing Vessel, Dual Mode ATB, USCG Subchapter M, is equipped with Intercon Coupler Systems, and will pair up with Barge B. No. 270. 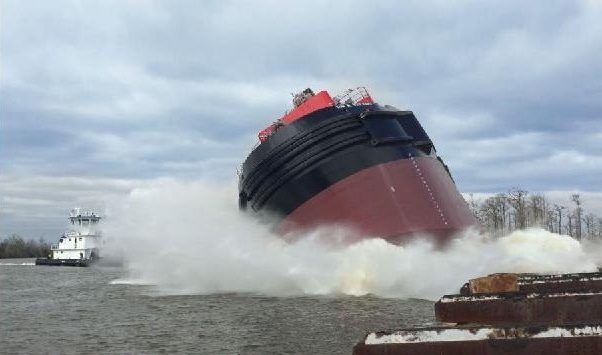 The barge measures 625 feet by 91 feet by 47 feet and has a 250,000-barrel capacity. Used to transport liquid petroleum, the barge is ABS and USCG certified for Jones Act service.

Construction of this unit began January 2014 with delivery scheduled for June 2015. This unit will enter into Bouchard’s fleet service in New York, NY.

“Bouchard Transportation Co., Inc. announced that the Kim Bouchard was successfully launched on February 26, 2015, at VT Halter Marine’s Moss Point Marine facility,” says Morton S. Bouchard III, president/CEO, Bouchard Transportation. “The Kim Bouchard will be joined up with the B. No. 270, also being built at VT Halter Marine. Bouchard has six vessels being built there and looks forward to future successful launchings.”

VT Halter Marine CEO Bill Skinner, said, “It is with great pride that we launch another quality-built tug today, the Kim M. Bouchard, for our long-time customer, the Bouchard Family. We look forward to joining her with Barge B. No. 270, as this is one of the most efficiently built ATB units for Jones Act trade.”