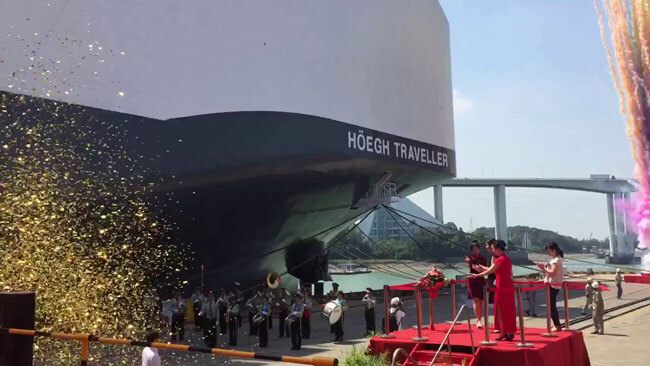 Höegh Traveller is the fifth in a series of six Post Panamax vessels under the New Horizon design that Höegh Autoliners will take delivery of within this year. With its deck space of 71 400 square meters and carrying capacity of 8 500 car equivalent units, the vessel is one of the world’s largest Pure Car and Truck Carrier (PCTC).

The vessel also has a higher door opening than Höegh Autoliners’ current vessels, enabling cargo up to 6.5 metres high and 12 metres wide to be loaded. Extra ramp strength allows for cargo weighing up to 375 tonnes to be loaded over the stern ramp and 22 tonnes over the side ramp.

Höegh Traveller is together with its sister vessels designed to minimise its impact on the environment. Energy efficiency principles have been followed throughout the ship design process and the latest technology in the market has been implemented. Attention has also been paid on optimising the hull form in order to combine high cargo capacity and low fuel consumption. Extensive model testing has been carried out to achieve outstanding performance. In addition to calm water performance, special focus has been paid on added resistance in heavy seas and wind resistance. Furthermore, the New Horizon vessels are estimated to emit 50 per cent less CO2 per car transported than a standard car carrier.

Höegh Traveller, will begin its Maiden Voyage from East Asia to Europe in early September, and is thereafter planned to sail from Europe back to East Asia via Africa and Oceania.

Höegh Traveller and its sister vessels are given DNV-GL’s class notification “CLEAN” for its cleaner design.

Watch the champagne bottle break and the name of the vessel being revealed in this short video: