Debmarine Namibia’s new N$2.3 billion (US$139 million) diamond sampling and exploration vessel, the mv SS Nujoma, has been launched at the Kleven Verft AS shipyard in Ulsteinvik in Norway.

The 12,000 tonne vessel slid down the slipway into the water ahead of schedule on 9 January to the applause of the ship owner, shipbuilders and the Ulsteinvik community. You can watch footage of the enourmous ship being launched into the sea in the film below.

Now that the 113 metre long vessel is floating, its outfitting will be completed before sea trials and final delivery from Kleven to Debmarine Namibia. 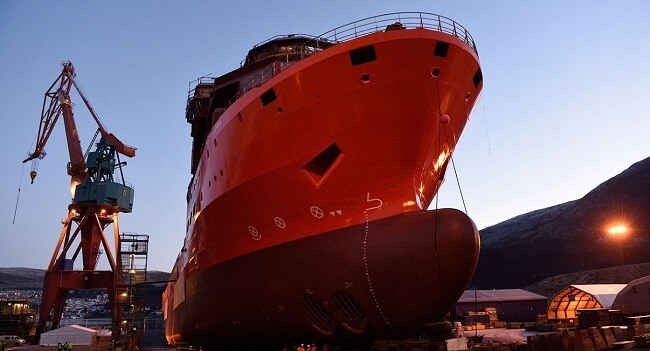 The SS Nujoma, named after the Founding President and Father of the Namibian nation, Dr Sam Shafiishuna Nujoma, is the first of its kind and incorporates a range of innovative technologies.

Debmarine Namibia is recruiting Namibian skilled and licensed seamen who will undergo training prior to the vessel handover. The second part of this project, the subsea sampling system and treatment plant, has been developed in parallel by De Beers Marine South Africa and will be installed on the SS Nujoma in the Port of Cape Town in the second half of 2016.

The vessel, which has a helicopter deck suitable for Sikorsky S61s, is diesel electric powered and can accommodate up to 80 crew. It is the most advanced marine diamond sampling and exploration vessel in the world and will be the sixth in the Debmarine Namibia fleet. It is scheduled to start commissioning in Namibian waters in the first half of 2017.

“This adventure is still in the making as much work still needs to be done prior to the vessel’s maiden voyage to Africa. The loyalty, dedication and commitment of the project team thus far are commendable.”

Debmarine Namibia was established in January 2002 and mines in the offshore mining licence area off the southern coast of Namibia at water depths of up to 140 metres. The company employs 800 people, 75 per cent of them seagoing.

Watch: Explosion Onboard ‘Stolt Groenland’; One Crew Member Injured
Want to share your tips and advice? Got questions? Visit the community forum to ask questions, get answers, meet people, and share your tips!