Federal, state and local response personnel as well as representatives from the barge companies are monitoring air quality and assessing damage and possible impact to the environment Monday after barges collided at mile marker 349 on the Intracoastal Waterway near Bolivar Peninsula in Texas and a fire ensued in the early morning hours. 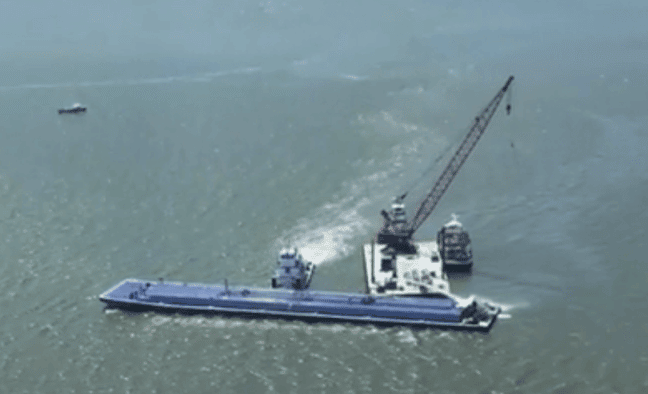 A Port of Houston fire boat arrived on scene and began firefighting. The fire continued until about 5:25 a.m., when it was extinguished with the assistance of a T&T Marine Salvage vessel. No injuries were reported. At this time, response officials do not believe any significant amount of product was released into the waterway. Air monitoring in the area continues to show no risk to the public.

By mid afternoon, incident responders moved three of the barges to a safe location to lighter the product off of them and continued working to stabilize the remaining barge for it’s transfer and subsequent lightering.

The closed section of the Intracoastal Waterway from mile marker 348 to the Houston Ship Channel has been opened to one-way traffic westbound at a slow bell until the remaining barge can be moved. Vessel traffic in the Ship Channel itself has not been impacted.

The cause of the incident is under investigation. It is unknown at this time if the fire was burning diesel fuel used aboard the barge, or the naphtha product.

Watch: Floating Power and Water Barge (Cogeneration) With Reverse Osmosis Equipment
Want to share your tips and advice? Got questions? Visit the community forum to ask questions, get answers, meet people, and share your tips!