LÉ Aoife, the 65-metre-long Irish patrol vessel crashed into a pontoon at the deep water quay in Cobh, Co Cork.

A Naval Service spokeswoman told the Irish Examiner that the accident had been caused by a mechanical problem which led to the vessel propelling forwards when it should have been gone backwards. 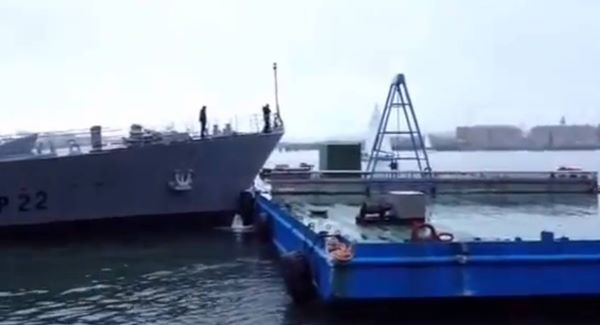 Footage of the accident, which happened last Saturday afternoon, was posted on YouTube by Scandinavian tourists. It shows the Irish naval ship, which was launched in 1979, striking the pontoon with its bow.

The ship is due to be decommissioned next year and it is assumed that the age of the vessel may have been a contributory factor to the crash.

Engineers from the Naval Service are assessing the damage caused to the LE Aoife. The lifespan of a ship is usually 30 years and but the LE Aoife is 34 years-old.

After the accident the ship was taken back to the naval base a short distance away at Haulbowline.