Can we measure a ship’s length easily? Yes.

Can we measure a ship’s height easily? Yes.

But can we measure a ship’s weight that easily? Turns out it’s a big no-no.

If you even have the slightest doubts that we actually measure the entire weight of ships by placing them on gigantic scales, then I’d just ask you to drop that idea midway and just continue with this article. 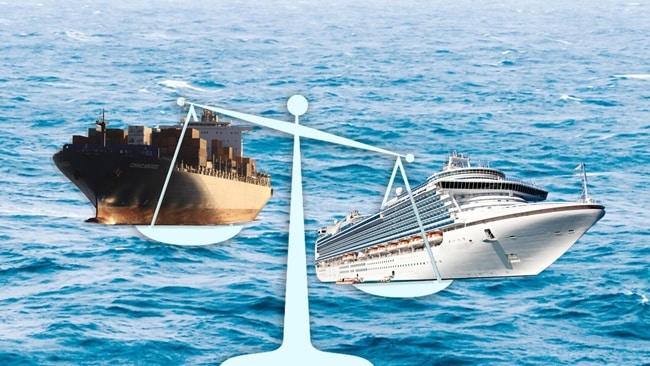 There are two specific methods employed by shipbuilders that are used to weigh ships. Although these methods vary holistically when it comes to accurately predict the weight of the ship, they do come pretty close to the actual reading without much of an error percentage.

Even though the percentage of error is higher via this method, a rough estimate of a ship’s weight can be done via this method during the conceptualization of the design itself; spanning all the way to the vessel launching.

The weighing can be done by estimating the weight of each of the machinery and other parts to be used in the construction and eventually adding them up. As mentioned before, this results in the ship amassing a higher error percentage than the other method.

Thanks to our eighth-grade friend Archimedes and his relatively simplistic theories on floatation, we can actually predict the weight of ships using pinpoint accuracy.

Naval architects, that is, those who are designing ships, prepare a general table which states how much weight of cargo a ship can safely carry.

If you’re amongst the lucky ones who got to work on a ship or saw a ship upfront, I’m sure you will have noticed the numbers written on the hull of a ship. These are known as draught marks, which gives us the exact mathematically calculated number as to how deep the ship is sitting into the water at a certain time.

The numbers start from 0, going all the way up to the deepest draught the ship could handle before being destabilized and consequently, sunk.

Well, this might just be the perfect measuring tool in an idealistic calm sea, which mostly never exists. There are constant disturbances in the sea, rendering the ship to be in some sort of movement throughout.

For accurate measurements, draught marks are located at different points throughout the entirety of the ship- in the forward, midship as well as the aft end of the ship. There are 2 marks each on the port side and the starboard side.

Average readings of all the 6 places give a very clear idea of how deep the ship is in shallow waters, additionally giving us information about any bending in the hull.

This allows us to calculate how much water is displaced from the source, which in turn gives us the weight when multiplied with density.

Density, on the other hand, is a physical quantity which varies in seawater from place to place, depending on the quantity of seawater dissolved in the water. We have density measuring instruments onboard ships, which gives us accurate readings, thus enabling in the prediction of the ship’s weight.