ESVAGT ALPHA was on her return to Esbjerg from crew change with 43 crew onboard.

The SILVA carried a cargo of timber including deck cargo. The vessel had a list of approximately 35 – 40 degrees due to the deck cargo having shifted. 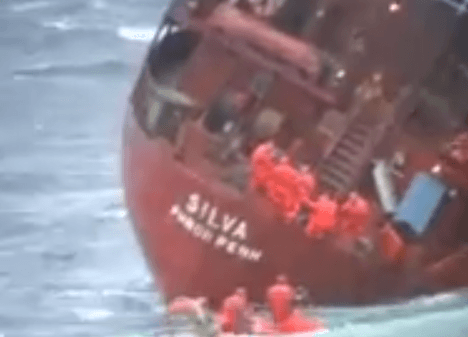 The crew declined evacuation before daylight.

As the crew onboard the SILVA apparently had no survival suits and only traditionally lifesaving appliances, 12 survival suits were delivered from ESVAGT ALPHA by means of rescue helicopter.

Between 0835 and 0858 12 crew members jumped into the sea, one by one in groups of three, to be picked up by the waiting FRC from ESVAGT ALPHA.

Watch the video of the amazing rescue operation in the article inside:

Do you have more information on the incident? Let us know in the comments below.

NOTE: Marine Insight does not have enough information to verify this video and cannot vouch for its accuracy