You are here: Home › Videos › Watch: Time-lapse Footage Of Largest Ever Ship on the Thames
TwitterFacebookLinkedInPinterestBuffer

Edith Maersk is the largest ship ever to enter the Thames arrived at DP World London Gateway, the UK’s new deepwater container port. The 397-metre-long, 56-metre-wide Edith Maersk has a draught of 16 metres and carries up to 15,500 TEU (twenty-foot equivalent units).  DP World London Gateway operates eight of the UK’s largest quay cranes; their air draft and overreach capabilities mean that the port is well-equipped to handle the world’s largest vessels of today and tomorrow.

“The arrival of the Edith Maersk is a historic moment,” said CEO Simon Moore. “This is one of the world’s largest ships and the biggest ever to enter the Thames.  Our high-tech facilities give us the capability to handle ships like Edith Maersk only 30 miles from the centre of London. By bringing the biggest ships in the world closer to UK consumers we are now reducing UK import and export costs. As we approach our first year of opening, we are delighted to see Edith Maersk at DP World London Gateway.” 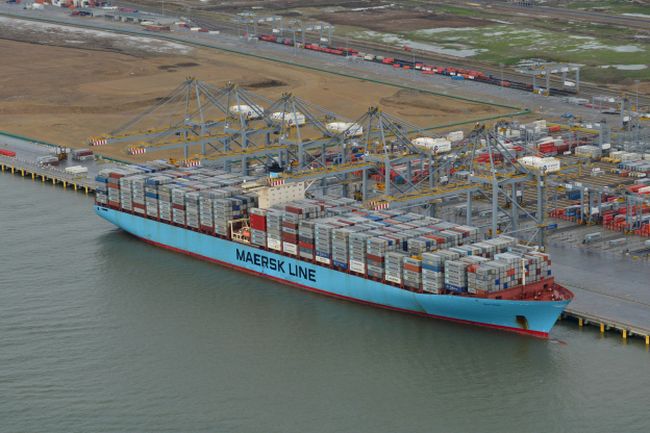 The Edith Maersk is deployed on Maersk Line’s AE2 (Asia-Europe 2) service.  The next stop is Singapore. Next month (November), DP World London Gateway will celebrate its first anniversary. Since the first scheduled ship call by the MOL Caledon marked the official opening on November 7th 2013, the port has welcomed a series of new shipping services and continued to develop new berths and facilities. It also provided a sheltered ‘haven’ during last winter’s storms, with a series of large containerships diverting to DP World London Gateway when other ports were forced to close, helping to keep the UK supplied with goods.

Over 10,000 people have worked at DP World London Gateway since the project was given the go-ahead in 2008. The port has seen a string of firsts, including the first ever female Quay Crane driver to work in a UK container port.