Brodosplit has made the largest ‘heavy lifter’ in the world. It is a prototype which was completed in record time, 21 months, from the start of planning to its launch. It is the pride of the shipyard, and I hope there will be more of these types of ships – concluded Mr. Tomislav Debeljak in his speech.

Launching was attended by numerous representatives of the client – Dutch company JUMBO, partners in the construction, local government, Croatian Shipbuilding – Jadranbrod and Dutch embassy in Croatia, and speech was given by Mr. Michael Kahn CEO of Jumbo.

This ship is unique and exceptional in that it is the biggest ship of this type with the most sophisticated equipment. When we decided which shipyard will entrust the construction of the heavy lifter’s, we went to Brodosplit and then I started a conversation with one engineer at the gate, a grizzled gentleman, who was proud of the ships built in Brodosplit, actually, he believed that all ships built in the shipyard are ‘their ships’, and in conversation I realized how professional and skill he is in work. 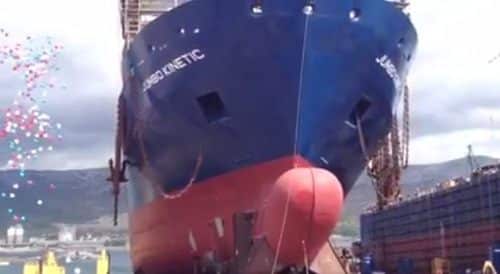 This great dedication to the work, feeling that it is not for others than for themselves and the expertise were significant arguments why we decided to entrust this job to Brodosplit – said Mr. Michael Kahn in his speech. Godmother of the ship, Mrs. Philippine Kahn, wife of Mr. Michael Kahn cut the rope with the champagne and symbolically “named” ship ‘JUMBO KINETIC’.

Anyway, Nwbg. 473 is the ship mainly used to set up very heavy and expensive equipment for offshore oil drillings and transportation of heavy or large size cargo. The Heavy Lift Vessels with 152m length, 27m width and 14.000t deadwight at draft of 8,1m, will be equipped with two engines of 4500 kW at 750 rev/min, which would enable them to develop maximum speed of 17 knots. They will be equipped with two cranes each, with a total lifting capacity per vessel of over 3000t max. Nwbg.  473 is the first in a series of two ships that Brodosplit contracted with the Dutch company. The ships are being built in Lloyd’s Register class, ‘1A super’, which means that they can break the ice thickness of up to one meter without the help of icebreakers and will be the largest in their fleet.

5 Biggest and Magnificent Sailing Ships of All Time
Knock Nevis : The Journey of the World’s Largest Ship from Japan to Alang,India
Top 5 Biggest Aircraft Carriers In The World
The Maersk E Class Series Container Ships