Drones could cut time and costs for deliveries and inspections across the Maersk Group – but they must be reliable and absolutely safe. Maersk Tankers is testing delivery to vessels on drones that have been certified for explosive environments.

Markus Kuhn peers out through the fog and spots the Maersk Edgar waiting across the chilly Danish waters.

Drone operator Thierry Bauer, dressed against the winter cold after a long journey from his centre of operations in Southern France, carefully attaches the cargo of Maersk cookies to its transport.

“We’ll try and get some distance between us and the vessel, as much as we can while keeping visibility through the fog,” says Kuhn, Supply Chain Manager at Maersk Tankers and part of Maersk Group Procurement Marine, who is running a project to test their possible uses. The test, in collaboration with Bauer’s drone maker Xamen Technologies, was the first using a drone to make a delivery on board a vessel. 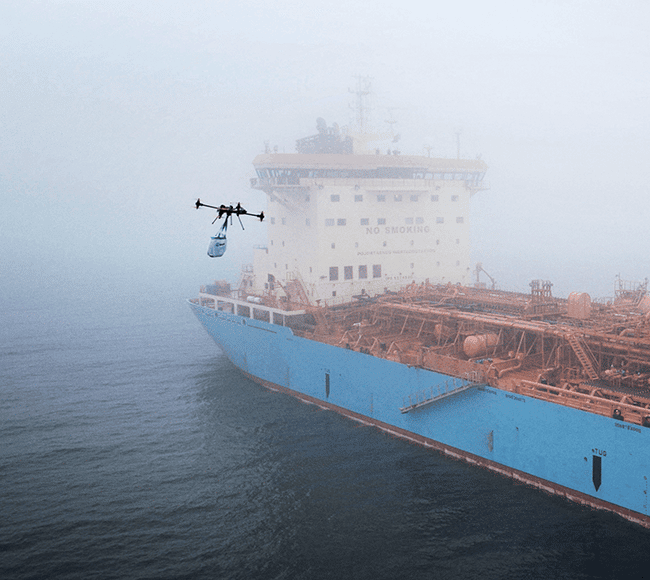 “Drones can make savings in both costs and time. There are high costs for on-board delivery of small parcels, filled with urgent spare parts or mail, because of the need for a barge” says Markus Kuhn, Supply Chain Manager At Maersk Tankers And Part Of Maersk Group Procurement Marine

In the tankers business, it can be hard to predict far in advance which port will be called next and even when in port, it can be complicated and expensive to deliver items to vessels as they are not alongside the quay.

Costs for a barge are on average USD 1,000 and can be higher. That means, drone use could with the current payload bring potential savings of USD 3,000-9,000 per vessel per year, Maersk Tankers estimates.

Drones must be safe for the environment they are operating in and for Tankers certified as intrinsically safe, so they cannot create any spark even if they were to crash. The purpose of this test at Kalundborg is to use a drone that is already ATEX approved for potentially explosive environments, and see how the concept works.

“Drones can make savings in both costs and time. There are high costs for on-board delivery of small parcels, filled with urgent spare parts or mail, because of the need for a barge,” says Kuhn.

Drones are being tested for inspections across the Maersk Group. Maersk Oil is using them for installations in the North Sea and APM Terminals for cranes in its ports. A small group of experts, including Kuhn, is identifying the common interests of business units and listing potential suppliers.

Other potential uses as drone technology are developing rapidly. They could carry out inspections or piracy look-out in high-risk transits. Inspections could include high quality photos or videos of certain areas, such as the transom stern and flare on the bow, or cargo tanks.

Once a suitably ATEX approved drone is available, Maersk Tankers could avoid the costs and time for washing, gas-freeing and re-inerting during a cargo tank inspection. Drones could increase the quality of inspecting challenging areas and with high quality images, meaning cracks can be identified faster. Those potential early findings could avoid higher expenses if problems are only discovered later.

Offshore in Denmark’s Great Belt, the drone quickly gains height into the misty white. It motors quickly over the short divide between barge and tanker, hovers 5 metres above the deck and drops its cargo of Maersk cookies on to a designated landing spot.  The original plan to launch from shore was changed because the fog, so the team worked from the barge instead.

“We are very early in the process and we need to be sure the technology works safely,” says Kuhn. “It’s often quite challenging to get things on board. So I was a happy man when the test worked out fine.”

The next steps for Maersk Tankers and the Maersk Group are to evaluate the test findings. Drone technology is developing rapidly and the Group Technical Innovation Board has slated this area as one of five projects to commence in 2016 as part of an effort to develop a pipeline and culture of early-stage technical innovation.

On board Maersk Edgar, Captain Peder Georg Kastrup Christensen hands out the freshly-delivered Maersk cookies, which survived the trip unbroken.

“It’s a totally new step in delivery to vessels,” says Captain Christensen. “Today it’s cookies. Another time it might be medicine which we need to treat someone on board.”