You are here: Home › Types of Ships › What is the Sea Based X Band Radar?
TwitterFacebookLinkedInPinterestBuffer

One of United States’ ingenious contriving, the SBX-1 – Sea-Based X Band Radar – is an offshore radar which operates at the high seas. Unlike the conventional ship radars, the X-band radar is a movable, self-propelled radar system, specifically built in order to successfully pinpoint, avert and stop any attacks or threats coming towards the country.

The radar was specifically built by Boeing according to the specifications of the federal Ballistic Missile Defense System and is placed atop a Norwegian semi-submersible. 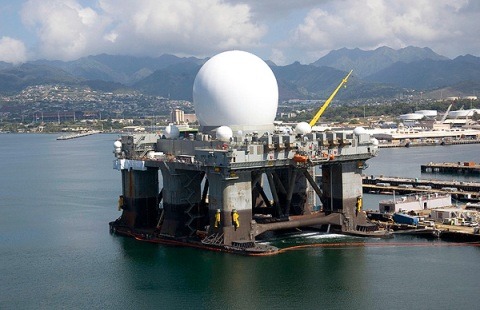 The main reason for the development of mobile radars was to ensure that the radar systems could be transported along the US waters to any region anticipating any international terror attacks.

The concept initiation of the ingenious radar at the sea started in the early 2000s when Boeing was given a US$ 1.3 million undertaking to begin work on the offshore radar. The very next year the required semi-submersible was procured and re-fitted in order to successfully place the radar over it. Various officials of the MDA – Missile Development Authority – the chief authority behind the concept of the X-band radars were actively present while the re-fitting was carried out.

The christened naval title for the radar is also mainly because of its intended area of operation. In entirety, the vessel took about three years to get completed from its planning stages and was officially put into operation in the year 2005.

Though the radar was developed to cater to the requirements of the Ballistic Missile Defence System (BMDS), for all practical purposes it is under the direct chain of command of the system’s GMD domain where GMD refers to Ground-based Midcourse Defense. Overall in terms of maintenance, the radar is under the authority of MDA while the semi-sub itself is under the command of MSC – Military Sea-lift Command.

–  The semi-sub atop which the radar is placed measures 389 feet lengthwise, 238 feet breadth wise with a draught of 33 feet

–  Along with the offshore radar, the semi-sub also boasts of several other state-of-the-art communication systems and a helipad

In terms of the X-band radars, they are well-advanced as compared to their contemporary peers. Along with detecting the presence of any approaching missile, the radar will be specifically used to target whether any approaching object is a missile or not. Thus more than functioning as a radar system for narrowing missiles, the mobile radars system will scope out the target for the concerned military, naval and air force authorities. Alternatively if a threat has been identified and narrowed down, then based on the directives issued by the GMD, the radar is also equipped to counter-attack the approaching missiles and take them down.

Architecturally, the radar base is octangular with the radar dome measuring over 100 feet both height and diameter wise. The radar dome itself is made of a synthetic textile and is resistant to gales and stormy winds at sea. The overall architecture was sub-contracted to Raytheon who oversaw the radar system’s constructional and trialling processes.

Through the sea-based X-band radar, the US federal government has strove to prioritise its coastal and national security. Keeping in mind the aspect of national security, it wouldn’t be wrong to assume that the various nations in the globe would be working to develop such a technology in the better interests of their nation and its people.

The Troll A Platform: One of the Biggest Floating Structures in the World

What are Non Ballast or Ballast Free Ships?

Solitaire – The Largest Pipe Laying Vessel in the World

INS Vikrant: The History and Time-Line of the Mighty War Ship
Want to share your tips and advice? Got questions? Visit the community forum to ask questions, get answers, meet people, and share your tips!