Christened after a Scottish poetry, the MV Hallaig is the first vessel in the world to be built under the ‘Low Emissions Hybrid Ferries Project.’ The advanced ship project is an initiative carried out in collaboration between the Scottish government and private shipping companies to enable the sustenance of the maritime ecology.

MV Hallaig is the first passenger/vehicular ferrying Ro-Ro ship in the world to be equipped with a multi-fueling system using diesel-electricity and lithium ionized battery systems. This also makes it the world’s first hybrid ferry.

The total investing in the project was about 20 million pounds, contributed by various sources including the Scottish government and the ERDF (European Regional Development Fund). MV Hallaig hybrid ferry is owned by the British shipping empire Caledonian Maritime Assets Ltd. and will ply between the route of Raasay and Skye. 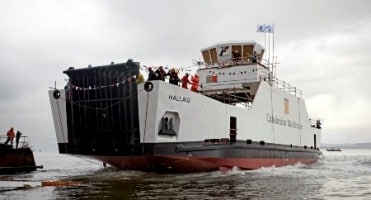 The route holds considerable maritime significance as it passes through River Clyde and the islands of Hebrides. These form two of the most important navigational pathways along the Scottish west coast.

MV Hallaig’s unique engineering module is expected to significantly lower the discharging of carbon dioxide and other noxious gases. In addition, the in-built technology of the ferry ship allows the utilization of renewable power sources to refuel the batteries used to operate it.

The battery systems will be refueled while the vessel is harboured thus preventing any hindrance during the course of its operations. These aspects of Hallaig’s construction are considered to be quite path-breaking which in-turn has rightfully increased the expectations placed on MV Hallaig’s viability.