Operating in the Isla Galapagos, the National Geographic Endeavour packs a stellar combination of opulence and magnificence, both in its construction and its area of maritime exploration. The Isla Galapagos, or the Galapagos Island, is located in the Pacific Ocean under the Ecuadorian governmental ownership. 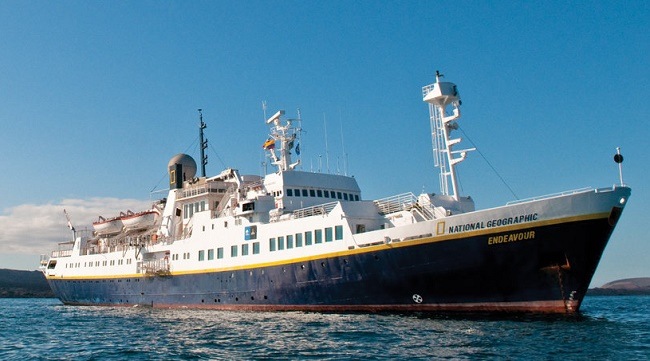 An archipelago, the Galapagos Islands is a rich and thriving hive of maritime wildlife, unrivalled by any. Aboard the National Geographic ship, each and every minute element of the versatile animal and plant life gets accentuated to the fullest, which further enriches the voyagers’ expedition experience.

The National Geographic vessel comes equipped with amenities like canoes, skin diving equipment, technological gadgetries to be used in sub-water explorations and a special vessel with a glass-base to provide for emphasised tourism allure.

A major aspect about the ship is that even though it calls for heightened visual experiences of the Galapagos, many in close contact with the naturalness, the expedition doesn’t compromise on the safety of the voyagers.

Each exploratory trip during the fortnightly tour is carried out under the observation and monitoring of qualified and experienced personnel. Furthermore, the Endeavour comes fully equipped with necessary medicinal supplies and amenities so as to cater to any potential emergencies.

In its own unique way, the National Geographic Endeavour has become an informal flagship of the joint-venture between Lindblad Expeditions and National Geographic adventure. As compared to many other ships of its ilk, while its dimensions and proportions might be modest, its service-offering is thoroughly world-class.