A semi-submersible oil rig, the Scarabeo 9, is soon set to begin its oil exploration operations in the waters of Cuba. Designed as a Frigstad D90 oil rig variant, the Scarabeo is a part of the fleet of the Italian conglomerate Saipem and is one of the biggest oil drilling ships in the world.

In the recent few years, a lot has been spoken about the potential threats caused by oil rigs to the marine environment. However, even as these threats continue to be discussed, oil exploration projects are still in demand as they were before. According to the statistics quoted by the American authorities, the Cuban high seas are a reservoir of nearly five billion barrels of oil and contain gases that extend to trillions of feet deep. 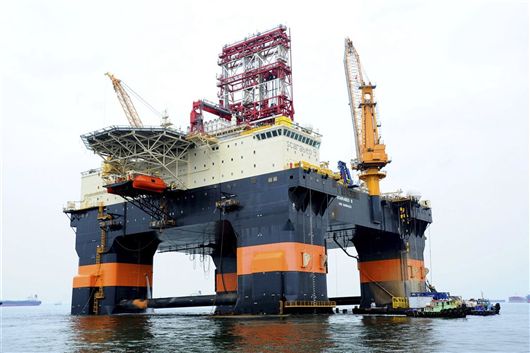 At present a wide number of companies engaged in oil excavation activities in the high seas are utilising the semi-submersible. One of the most prominent companies in this context is the Spanish conglomerate Repsol YPF which made huge waves by digging oil reservoirs seven years ago – in the year 2004.

The Scarabeo 9 fulfils all the necessary requirements about incorporating the technological systems of the United States because of the trade barriers and restrictions, which contributes to its applicability far more substantially. With a drilling penetration that extends to about 12,000 feet, the Scarabeo 9 is currently being operated at depths ranging to a maximum of 5,000 feet.

In terms of its specifications, the semi-submersible oil rig has a length of 115 metres and a breadth of 80 metres. The vessel has a displacement of over 30,000 tonnes and a depth of almost 35 metres. Equipped with two cranes to enable it to carry its designated purpose, the vessel has a deck lading capacitance of almost 9,000 tonnes and can easily accommodate a crew of 200 members.

The high seas’ oil and gas excavation is a sector that accounts for almost US$ 150 million in the international market making the utilisation of the Scarabeo 9 even more relevant in the contemporary market conditions.