Based on the vision of one of United States’ brilliant leader Dwight Eisenhower, the NS Savannah was a cargo ship that set many imposing standards. It was the first nuclear merchant ship to be built as a part of Eisenhower’s ‘Atoms of Peace’ platform initiated in the 1950s in an attempt to emphasis and demonstrate the productive utilization of atomic energy across the world.

Put into operation in the year 1962, the NS Savannah nuclear powered ship was primarily built to be utilised as a voyager-cum-freight ship. The vessel’s construction was a joint collaboration between three of US’s major authorities – MARAD, the Commerce Department and its Atomic Energy Commission, costing nearly US $ 47 million at that time. This constructional cost also included the cost of the atomic reactor equipped to provide the necessary fuel source to the vessel.

In spite of its elaborate launching, the NS Savannah nuclear ship was not actively utilised for that long a period, but it has been widely accepted that in terms of President Eisenhower’s vision, the vessel was an overwhelming success.

Starting with its construction which allowed for opulent living accommodation for the voyagers to its exceptionally high operational efficiency, the NS Savannah nuclear ship was a marvel to be proud about. Christened after the first SS Savannah, the first nuclear fuelled US voyager ship in the early 1800s, the NS Savannah truly fulfilled its global expectations.

The salient characteristics of the nuclear ship can thus be listed as follows:

Operational Constraints and Life after Decommissioning

First used as a voyager vessel, in its latter years of service, the Savannah nuclear merchant ship was fully utilized as a freight vessel operated by the American Export-Isbrandsten Company. 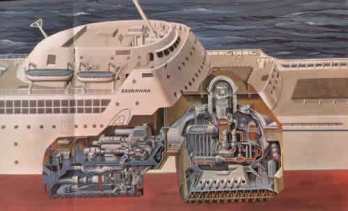 High costs of operation along with limited freight carrying capacity, as compared to the other freight ships of that time, however prevented the merchant vessel from being in active operational service for a longer time-span.

In addition many critics even argued that the intended duality of operations allowed for a lot of problems while the merchant ship was actually being utilized  The nuclear ship could neither be fully optimized as a voyager ship nor as a freight ship in totality which finally led to its recalling from active maritime service.

In the year 1972, the vessel was decommissioned and was put as an exhibit in the harbour of Galveston in the state of Texas. 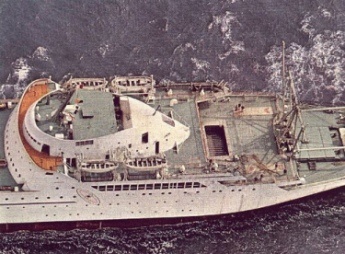 Presently, the nuclear powered merchant ship is docked at the harbor of Baltimore and has been inducted into the US’ list of ‘National Historic Landmarks.’