Built to suit a specific purpose, the Northern Eagle trawler is incomparable to any other fishing trawler of its like. Owned by the American Seafoods conglomerate, the vessel’s functionality extends to more than being only a trawling vessel for the Pollack specimen of fishes and encompasses the entire ambit of the fishes’ processing and further treatment for consumption, across the globe.

The demand generated for the Pollack forms an important constituent of the fisheries sector worldwide. It is only through the operational commitment of fishing vessels like the Northern Eagle trawler vessel that there has been able to be maintained a steady tandem between the demand and supply of the Pollack specimen, found only in the freezing Arctic. 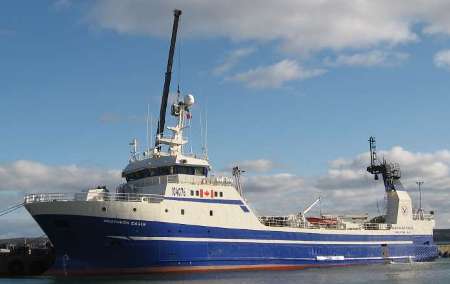 The high season for the Pollack is during the month of January throughout April. Consequentially, the four months spanning from January to April are regarded to be the best time to fish and carry out the necessary processing activities on the Pollack. However, the vessels’ passage to the geographic location where the Pollack are known to naturally occur – in the Aleutian Islands, Bering Sea and the Alaskan Gulf – involves passing through lashing winds reaching about 60 nautical miles per hour and icy waves powerful and lethal to pull a man down into the icy depths of the Arctic.

Covering a wider domain, the Northern Eagle trawler vessel incorporates trawling for the fishes’ eggs, while its equipments carry out a wide range of activities right from processing the Pollack to obtain an edible and well-seasoned paste – Surimi to even procuring oil from the specimens, apart from the regular processes of filleting, marinating and freezing the fish.

The factory trawler vessel houses an amazing array of processing equipment, unmatched by any other fishing trawler. These equipments help in the fast turnover of the fish right from it being trawled from the waters to being processed to suit the demands of the global clients. 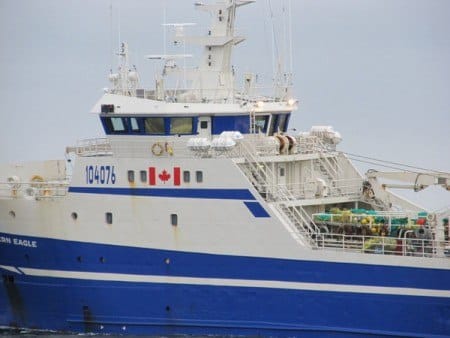 In terms of statistics, this processing capacitance of the equipments translates over 50,000 Pollack per hour.

A lot of concerns have been recently raised about the harsh working conditions within the trawler vessel. The constancy in the functioning of the equipments poses a perennial threat to the lives of the working personnel engaged in the various processing activities. In the past few years, the owners of the Northern Eagle trawler came under public glare when suits were filed against them, by relatives of working personnel who suffered severe accidents while working on the ship. Some of these accidents were fatal, which further added to the claim amount quoted by the grievous kith.

Apart from tough working conditions and the danger posed by the equipments, the isolation of the vessel’s operation for months on end also becomes a cause of concern in case the crew and the working personnel become ill on account of the prevailing harsh climate. Lack of timely medical attention and amenities, except for the medical supplies stocked onboard, also becomes a threat to the lives of the people working or wanting to work as a part of the Northern Eagle ship entourage.

Act Now For Safe Fishing, IMO Secretary-General Urges States
US Shuts Off Seafood From Fiji Ship Accused With Charges Of Enslaving Crew
A Guide To Types of Ships

International Day For The Fight Against Illegal, Unreported And Unregulated Fishing 5 June 2021