The Mark V Class features four Ro-Ro ships built for the Norwegian shipping company Wilhelmsen and its corporate associate Wallenius. Constructed by the Japanese marine engineering giant Mitsubishi, these are the biggest RoRo vessels of their type presently in operation with a cargo capacity of almost 1, 40,000 cubic meters.

Each of the four vessels has been designed and built to provide viable cargo shipment along with ensuring the preservation of the marine ecology. 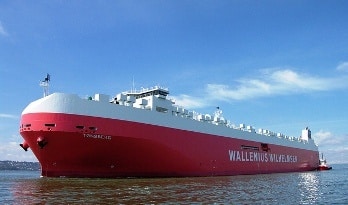 The advanced construction engineering of the vessels is specifically reflected in their unique hull design. The sleek hull system not only provides better constancy while the vessels are sea but also accounts for a reduction in the annual fuel usage by over five percent. Some of the other key technical aspects of the vessels’ construction include: 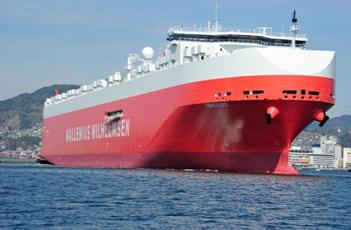 company first began its business operations. The vessel was also named as the ‘Ship of the Year 2011’ by a Japanese association of marine engineers and architects acknowledging its constructional brilliance.

Each Mark V Class vessel measures over 260 meters lengthwise with a width of slightly over 32 meters and a draft of about 11 meters  In terms of its cargo area capacitance, the Ro-Ro ships have nine cargo decks that provide nearly an area spread of about five million cubic feet. Three of these nine decks can be adjusted and lifted by windlasses, which further enables an ease in the loading and storage of the cargo.

Speaking of the cargo that can be shipped aboard the Mark V Class, alongside the generally transported cars and vehicles, the enhanced storage capacity within these vessels also allows the loading and transportation of bulkier vehicular systems like tractors. 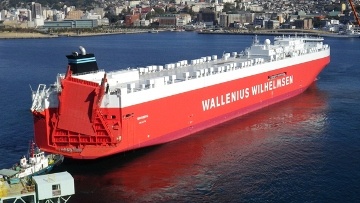 Both for Wilhelmsen and for the global maritime world, the Mark V Class represents yet another successful notch in the application of the Ro-Ro technology. Given the work-ability of the Mark V Ro-Ro ships, it can also be expected that the fruitful collaboration between the Norwegian company and its Japanese shipbuilding associate will continue to thrive with even better results for the entirety of the shipping world to marvel at. Through their conceptualizing and construction, the Norwegian concern has substantially elevated the Roll-on/Roll-off vessel concept to greater heights.

You might also like to read : MV Faust – One of the biggest car carriers in the world   and Different Types of Roll-on Roll-off ships.