You are here: Home › Types of Ships › L-Cat: A Multi-Purpose Supply Catamaran
TwitterFacebookLinkedInPinterestBuffer

CNIM, a company known for its maritime innovations manufactures and supplies L-Cat, an abbreviation for a vessel known as the ‘Landing Catamaran.’ 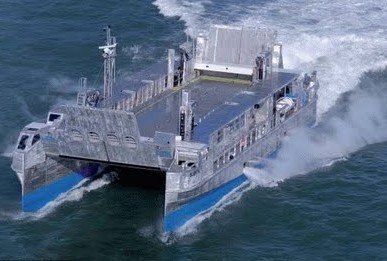 Mainly used for loading naval instrumentations, forces and vehicles that are transported through the amphibious naval vessels, the vessel offers unloading facilities on those harbours where adequate berthing facilities are unavailable. Four such amphibious vessels were acquired by the French naval authority, the Director General for Armaments (DGA) in the year 2009, while an additional quota for four more of these vessels are proposed to be acquired.

In addition to its utility as a naval concomitant vessel, the L-Cat can also be used for carrying supplies during rescue operations, for aiding humanistic operations in the oceanic waters and for aiding the combatant efforts to tackle the fast-growing threat of marine environmental pollution.

The launching of the L-Cat in the waters, can be either on-its-own or as a vessel deployed through a bigger ship stationed in the high seas; the utility and the viability of the L-Cat remaining unaffected in either case.

The specifications of the vessel can be enumerated as follows:

L-Cat has been duly patented by CNIM which further accentuates the import of the catamaran in the course of international marine operations as does the absence of its construction cost on financial corporations, which has been fully borne by CNIM.