Cable Innovator in an innovative cable launcher ship for laying optical cable fibers on the sea bed. This 10,557dwt ship was built in 1995 by Kvaerner Masa of Finland and is still making news for its unique work. The cable laying works are carried out in an efficient and speedy manner and all the cable laying is done over the stern so as to not slow down the ship. 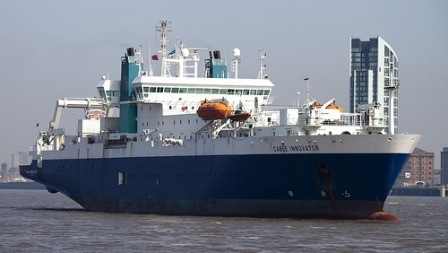 The total power produced from this assembly is around 12.8MW that makes Cable Innovator for sustained work over long distances, and under the harshest of the conditions. Of all the power produced, a total of 5.3 MW power is available at the vessel’s single main propeller powered by motors.

At the bow, further a White Gill jet thruster of 2000 kW and a tunnel thruster of 1200 kW has been installed for extra power source. Two tunnel thrusters have also been located at the stern which can provide 24t transverse thrust. The Cable Innovator sans a rudder is controlled in various modes with help of Cegelec 902, made from a manual joystick. This allows keeping track of ship’s movements at all times. The control of ship is looked in by SPARC computer located in the master console. This single system can supervise everything from thrusters, main propulsion motors, power systems, navigational systems and position measurement. 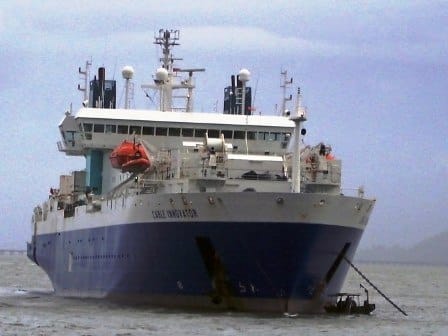 The computer and joystick system also allows the ship to interact with remote joystick stations and gyrocompass. Other navigation features on the ship include multiple GPS and SATCOM facilities along with navigational and bathymetry equipment for both shallow and deep water have been installed to make this ship self sufficient. The latest technology has been installed to upgrade the efficiency of its working.

The system of equipments on the ship helps to pool and display the data whenever needed. This becomes exceptionally useful during operations of cable-laying. The cable system has been provided with an alarm to indicate any discrepancy in cable tension or ship speed.

The communication arrangement in Cable innovator includes Inmarsat B&C and Vsat KU band. All the handling equipment is located on a 21-wheel pair linear cable-engine (LCE) and a 4cm diameter electrically driven cable drum. The cable drum is responsible for controlling the cable lay. It has a maximum volume of 4874 cubic meter and a maximum of 8500 ton load. There is also a hydraulically activated traversing cable deflector and a two deck head mounted single wheel pair of cable transporters. They help in traversing the cable lines being laid.

The instrumentations systems on the ship are both conventional and computerized. There is a 35 ton SWL A-frame with working arc that provides a 45⁰ outboard and 45⁰ inboard angle to handle the plough during burying the cable in the seabed. Two 10 ton SWL buoys have also been provided, along with one 5 ton SWL stores crane forward and one 2 ton SWL stores crane forward.

The total crew of the ship looks into functional operations and smooth running of the ship at all times. This crew is accommodated in a total of 80 cabins which include 42 officer cabins, 36 crew cabins and two representative suites. The ship also includes office suites and conference facilities. These facilities serve the best of accommodation purpose for up to 42-60 days, normal endurance period of the ship on the water.