In the 1800s, the paddle steamers used to be a contemporary marine marvel in the United States. The American Queen however bore the distinction of being the largest paddlewheel steamer built by the Delta Queen Steamboat Company in the year 1995.

At present, the American Queen is owned by the Great American Steamboat Company and is undergoing extensive refurnishing and refitting. The total cost of this refurbishing is estimated to be around US$ one million. The refurnishing includes addition of propellers powered by diesel in addition to the paddlewheel along with equipping several other modern amenities for the convenience of patrons.

Post refurnishing, the steamer will begin its present-day operations from the April of 2012 with cruises trips extending to durations between three and 10 days. The cost of a cruise trip is placed at US$ 995 with distinct emphasis on the river cruising style offered in Europe. And while the theme seems to be influenced by Europeans, the cuisine is purported to be truly American, incorporated with facets of Creole cuisines. The code of dressing for the patrons however is kept at casual with no formal wear for night-time events. 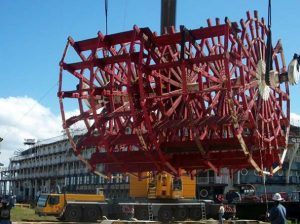 The cruising routes of the vessel will comprise of New Orleans (winter), between the Mighty Mississippi and the River Ohio (summer) and the Upper Mississippi (autumn).

The vessel has seen change of transference of ownership five in time in all. The present company was established with the sole intention of ensuring that the American Queen did not lose its presence and that it was more than adequately restored. 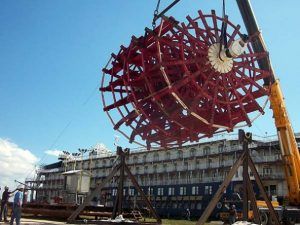 Apart from the American Queen, another paddlewheel steamer – the Queen of the Mississippi will be starting its operation from the August of 2012 under the ownership of the Great American Company.

Through these efforts, a conscious strive is being made to retain the vestiges of important and noteworthy innovations in the field of marine navigation.

Scarabeo 9 – The Massive Oil Drilling Vessel
What is a Factory Ship?
TIV MPI Resolution: Wind Turbine Ship with a Difference

Ramform Sovereign – The most advanced 3D seismic vessel in the world
Want to share your tips and advice? Got questions? Visit the community forum to ask questions, get answers, meet people, and share your tips!