You are here: Home › Shipping News › ZIM Tianjin – Largest Vessel Ever To Call On The Port Of Savannah
TwitterFacebookLinkedInPinterestBuffer

The Georgia Ports Authority welcomed the largest ship ever to call on the Port of Savannah on 18th March when the ZIM Tianjin docked at Garden City Terminal.

The ship measures 1,145 feet long by 150 feet wide. Stood on end, it would stand nearly as tall as the Empire State Building (1,454 feet, including its antenna). The vessel’s route originated in Qingdao, China, arriving on the U.S. East Coast via the Suez Canal.

“The port call by the ZIM Tianjin is another example of the strong and long standing professional relationship between GPA and ZIM,” said ZIM Vice President Brian Black. “We are very excited to have the largest vessel call Savannah!” 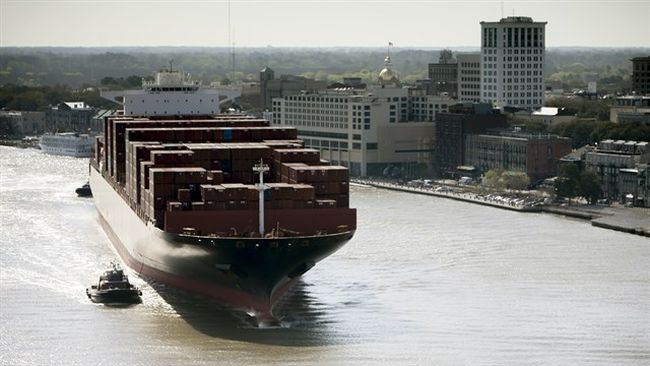 GPA crews will make more than 2,000 container moves on and off the vessel during its time at dock.

Foltz said ships in the Tianjin’s class provide lower cost per container slot for cargo owners – reducing the expense of delivering goods to customers at home and abroad. “The economy of scale achieved by Super Post-Panamax vessels is the reason we’re seeing more of them in Savannah, a trend that will only continue after an expanded Panama Canal opens in 2016.”

In order to better accommodate Super Post-Panamax vessels, the Savannah Harbor Expansion Project will deepen the main river channel to 47 feet at low tide (averaging 54 feet at high tide). This month, the U.S. Army Corps of Engineers issued a $134.5 million contract that will mark the start of dredging. The contract covers deepening the outer harbor, extending 18.5 miles into the Atlantic Ocean.

Dredging the outer harbor constitutes about half of the project to deepen the 40-mile shipping channel and harbor from deep ocean to Garden City.

Georgia has approved $266 million in bonds to cover the state’s projected share of construction costs. As the $706 million expansion moves forward, construction funding will shift to federal dollars. Better accommodating larger, more efficient vessels such as the Tianjin will save U.S. companies moving goods through Savannah 20 to 40 percent on transportation.

The Tianjin’s next stop is Kingston, Jamaica.

Singtel & KVH Industries Collaborate To Accelerate Digitalization Across Asia Pacific
Want to share your tips and advice? Got questions? Visit the community forum to ask questions, get answers, meet people, and share your tips!