Until recently, Japanese ports only allowed a maximum cargo weight of 92 tonnes including roll trailer. Following negotiations with port authorities, this restriction was lifted to extend the benefits of RoRo to customers with even heavier breakbulk cargo. 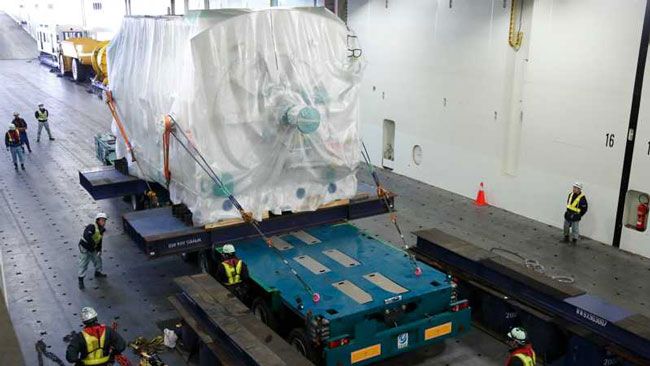 The first customer to benefit from the extended weight limit was a Japanese company that urgently needed to ship two generators weighing 242 tonnes each from Yokohama to Newport News, Virginia, in the United States. The challenge put WWL’s team to the test, and they quickly came up with a transport method to fit the customer’s requirements.

WWL has long experience in shipping heavy breakbulk cargoes up to 400 tonnes, and consequently it has a full range of tried and tested handling equipment to meet any challenge. For the heaviest shipments, this includes a blocks and beams solution which is used in conjunction with self-propelled modular transporters (SPMTs). Such equipment is positioned throughout WWL’s extensive global network. 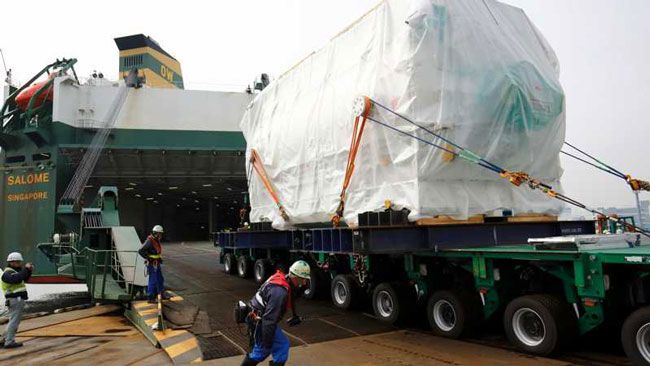 In this particular case, the cargo arrived at Yokohama’s port on a special barge and was placed on blocks and beams in the terminal before being picked up by the SPMT that rolled the cargo onto the vessel.

Once inside, the units were positioned on blocks and beams on the main deck by an experienced team and lashed in accordance with a carefully calculated plan, all to ensure a safe sea voyage. The whole loading operation was supervised by a senior WWL operational management expert who made sure all processes and plans were followed. The loading took just over six hours from start to finish.

Since this was a new operation for the port, it required significant coordination and collaboration between various teams, including the local barge operator, port authorities and stevedores.

“This was only possible thanks to the great collaboration between many stakeholders, and on behalf of the Japan team I’d like to thank everyone for a great contribution,” said Masaki Kunimatsu, WWL’s Head of Japan Port Operations, following the loading of WWL’s M/V Salome. “Let’s hope Salome will have a successful voyage across the Pacific, and we look forward to similar challenges in the near future.”

Kim Buoy, WWL’s Head of APAC Operations, added: “While this was a challenge for all involved and WWL in Japan specifically, it was impressive to see that we could quickly assemble a very competent and efficient team. The result was that the units were loaded on time to the agreed quality and within the agreed costs and, most importantly, on behalf of a very satisfied customer.”