On 22nd January 2016, General Dynamics NASSCO, a wholly owned subsidiary of General Dynamics, delivered the world’s second containership to be operated by liquefied natural gas (LNG), the Perla Del Caribe. The ship was delivered two months ahead of schedule and is the sister ship of the world’s first LNG-powered containership, the Isla Bella, also built by NASSCO for TOTE Maritime.

“The Perla Del Caribe and the Isla Bella exemplify world-leading, innovative technologies being used to build ocean-going ships that are cost-effective, friendly to the environment and offer a competitive edge,” said Kevin Graney, vice president and general manager at General Dynamics NASSCO. “NASSCO shipbuilders are proud to have successfully built the world’s very first LNG-powered containerships.” 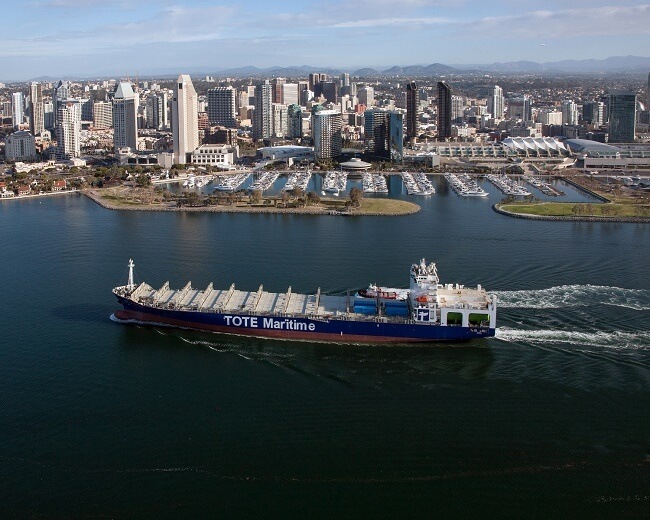 As part of a two-ship contract signed in December 2012 with TOTE, the 764-foot long Marlin Class containerships will be the largest dry cargo ships powered by LNG, making them the cleanest cargo-carrying ships anywhere in the world. This groundbreaking green ship technology dramatically decreases emissions and increases fuel efficiency when compared to conventionally-powered ships, the equivalent of removing nearly 16,000 automobiles from the road.

“It has been a pleasure working with the men and women of NASSCO over the last three years to bring the Marlin Class from concept to reality,” noted Anthony Chiarello, president and CEO of TOTE. “The Isla Bella is already serving the people and communities of Puerto Rico and we are excited to introduce the Perla Del Caribe into the trade next month.”

The Isla Bella was delivered to TOTE two months ahead of schedule in October 2015. This Jones Act-qualified ship has been operating between Jacksonville, Florida, and San Juan, Puerto Rico.

NASSCO specializes in the design and construction of auxiliary and support ships for the U.S. Navy and oil tankers and dry cargo carriers for commercial markets. It is also a major provider of repair services for the Navy, with capabilities in San Diego, California; Norfolk, Virginia; Bremerton, Washington; and Mayport, Florida. Its San Diego location remains the only major shipyard on the West Coast of the United States conducting new construction and repair.