Global marine terminals operator DP World’s flagship Jebel Ali Port has received the world’s largest container vessel, the Magleby Maersk, which is on its maiden visit to the region.

The management and operations team at Jebel Ali rolled out a well-drilled operation to welcome, berth and service the mammoth liner with the clockwork-like precision that has made the container port the most productive in the world. 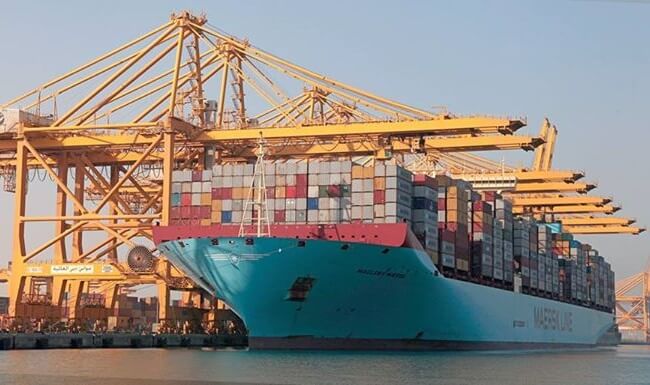 A commemorative plaque marking the occasion was presented on behalf of DP World to Captain Maagaard, Master of Magleby Maersk.

Jebel Ali is one of the very few ports in the Middle East equipped to receive containerships of the size of Magleby Maersk, a Triple-E class vessel with an overall length of 399.2 meters, equivalent to four football pitches.

The Magleby Maersk moulded beam is 59.00 metres wide and the ship has a maximum draft of 16.50 metres. Maersk Line operates the carrier on its 2M Europe-Asia route.

“The port is future proofed to handle developments in the industry and was inspired by the need for excellence envisioned by His Highness Sheikh Mohammed bin Rashid Al Maktoum, Vice President and Prime Minister of the UAE and Ruler of Dubai.

“This event reinforces Dubai’s and the port’s role as a regional gateway for the new generation of mega liner vessels. I thank Maersk Line for their support and assure them that Jebel Ali will continue to deliver the best and safest port services in the region.”

Mark Rosenberg, Head of Procurement, Maersk Line, said: “Jebel Ali is a port of priority for Maersk Line vessels visiting this region. We chose DP World’s flagship port for the maiden visit by Magleby Maersk because of the exceptional operational efficiencies offered here. We’re delighted that the DP World team has serviced our Triple-E vessel to our satisfaction and thank them for continuing to support our growth over the past 40 years in the UAE which is the trading and commercial hub of the region.”

Jebel Ali is equipped with the most sophisticated STS (ship-to-shore) semi-automated cranes that are operated remotely from the port’s Operations Building. With the completion of the 4 million TEU Terminal 3 the port will be able to handle 10 mega ships simultaneously.

Its ultra-modern infrastructure, smart operation systems and the world biggest quay cranes strengthen Jebel Ali’s role as the gateway to the Middle East, Africa and the Indian Subcontinent.

DP World recently started the construction work on the brand new Container Terminal 4 which will deliver new capacity of 3.1 million TEU in Phase 1 by 2018, taking the port’s total capacity to 22.1 million TEU.