Four STS cranes, the largest of their type anywhere in the world, have been brought onshore, ready for commissioning, at Algeciras port in Spain. Inchcape Shipping Services (ISS), the world’s leading maritime services provider, was drafted in by ZPMC to act as agents for the break bulk carrier, Zhen Hua 25, and to manage the safe and timely discharge of her cargo.

The cranes, which stand at over 100 metres, are to be used at the APM Terminal, specifically to service new Triple E Class container ships.  Algeciras, the busiest container port in the Iberian Peninsula, handled over 4.3 million TEUs in 2013 and the installation of these cranes will position it as one of the leading container ports in Europe. The cranes originated in Shanghai, with the voyage to Algeciras taking 50 days days, and the port call taking eight days. 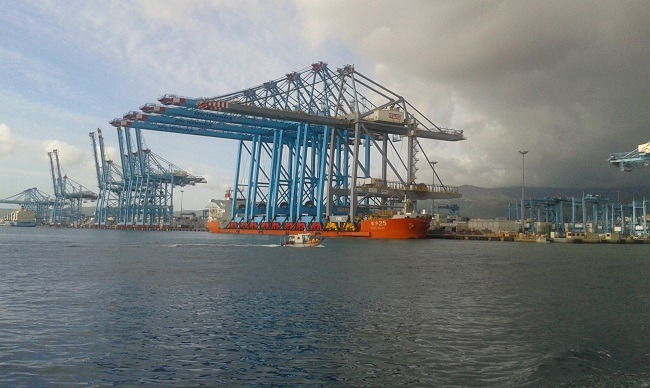 Julian Isola, ISS Operations Manager for Algeciras and Iberia said:  “We first arranged the entry clearance with the Harbour Master and liaised with all parties, including the pilots and the tugs. The vessel had to continually adjust her drafts during the crane discharge, in order to ensure proper stability of the vessel, so we also shared these plans accordingly.

“Daily weather updates were provided by ISS Algeciras in case extra tug assistance was required during the discharge but, due to favourable swell and wind conditions, the discharge was quick and effective.”

Fincantieri Signs Contract For Constructing Largest Ships To Be Built In Italy
Want to share your tips and advice? Got questions? Visit the community forum to ask questions, get answers, meet people, and share your tips!