Today marks the first call of MV Celine on the port of Rotterdam. The ship docked at C.RO Ports’ facility in Brittanniëhaven (port number 5230). The Celine is the largest Short Sea Ro/Ro vessel in the world.

MV Celine, which arrived from the South Korean port of Ulsan, was built by Hyundai Heavy Industries. The shipping line CLdN (Compagnie Luxembourgeoise d’Navigation) will be deploying the brand-new vessel in a weekly rotation along its itinerary Rotterdam – Bruges-Zeebrugge – Dublin – Bruges-Zeebrugge – Rotterdam – London – Rotterdam. Formerly known by the name Cobelfret, CLdN has been providing ro/ro services in North-West Europe for many years. 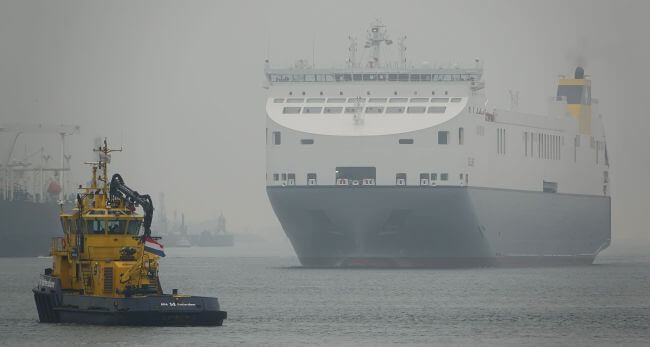 CLdN had announced an intensive expansion of its fleet in 2015. MV Celine is the first ship realised within this investment project to be taken into service.

Over the next few years, CLdN intends to ship more cargo to the United Kingdom, Ireland, Portugal, Spain and Scandinavia via Rotterdam. The shipping company is also considering an expansion of its schedule to new destinations.

CLdN’s plans to transfer more cargo via Rotterdam have also had an impact on the terminal of its sister company C.RO Ports SA in Brittanniëhaven. This facility will be adapted to this increase. To this end, C.RO Ports entered into an agreement with the Port of Rotterdam Authority and ProRail yesterday (23 October). The management of the two rail tracks situated directly on the terminal of C.RO Ports and the grounds that they run across has been transferred to C.RO Ports. This will allow the stevedore to expand its rail facilities to a fully-equipped, four-track rail terminal (with a 750-m marshalling section). All in all, C.RO Ports will be investing 30 to 40 million euro in its new Rotterdam terminal. This is in line with C.RO Ports’ recently-announced investment programme of over 150 million euro that it will be undertaking in Northwest Europe.

“The agreement between the Port Authority, ProRail and C.RO Ports aligns with the Port Authority’s general policy to increase the share of cargo transported via inland shipping and rail. We are therefore delighted with this development and C.RO Ports’ substantial investment in the further expansion of its rail product,” says Ronald Paul, COO of the Port of Rotterdam Authority.

Rotterdam saw a further growth of 6.6 percent in roll on/roll off (ro/ro) volumes in the first nine months of 2017 compared to the previous year, to a total of 17.9 million tonnes. This growth was caused by increased cargo flows to the dominant market in this category, the United Kingdom, as well as increased traffic to new markets like Portugal, Iceland and the Scandinavian countries.