You are here: Home › Shipping News › World’s Largest Lock Gates Made For The Port Of Antwerp
TwitterFacebookLinkedInPinterestBuffer

The four gates for the Deurganck dock lock in the port of Antwerp will begin their journey from China at the beginning of April.

The gigantic gates are being built by the Chinese steel constructor ZPMC, together with the trolleys on which the gates will ride, two combined road/rail bridges, the caisson and other items.

A ceremony was held on Wednesday 18 March in the Chinese city of Changxing to mark the official completion of the construction work. The ceremony was attended by Freddy Aerts, head of the Maritime Access department (Flemish government), Luc Arnouts, director of the Deurganck Dock Lock Company and also Chief Commercial Office of the Port Authority, and Eric Beyts from the Waasland Lock construction consortium.

Mr. Liu Jianbo, vice-president of ZPMC, emphasised in his speech how his company has been working hard on this project since 2011. For ZPMC, known worldwide for building gantry cranes, the project represents a new chapter in its offshore engineering activities. “And of course we hope that the bridges that we are physically building will also contribute metaphorically to mutual understanding between the Chinese and Belgian people,” he added.

The lock gates have the same length and thickness as those of the Berendrecht lock. However, the Deurganck dock lock will be 4 m deeper to handle the larger ships that are now coming into operation. This means the four gigantic lock doors will have dimensions of around 70 × 11 × 27 m (LxWxH) and will weigh 2000 tonnes each. 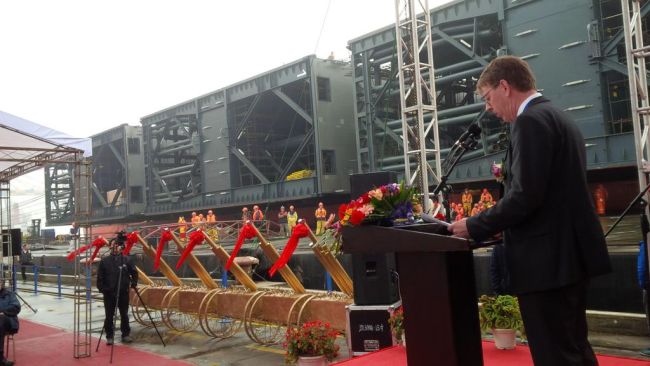 Loading the gates and ancillary equipment on board the ship that will take them to Antwerp, the Zhen Hua 15, began on 3 March, and the outsize load is scheduled to arrive eight weeks later. Manoeuvering the lock gates into position will itself be a major operation that is expected to take at least two weeks.

The steel construction work for the Deurganck dock lock was contracted out by the Waasland Lock consortium to ZPMC. The Chinese steel construction company is one of the largest gantry crane builders in the world. Since the worldwide recession, which also hit the shipping industry heavily, ZPMC has diversified into construction of civil engineering structures. It now builds bridges and other structures for customers all over the world. ZPMC has a whole arsenal of specialist construction equipment, a 5 km quay and its own fleet to bring the steel structures to the customers. It employs an estimated 30,000 people.