LR has won a contract to class the world’s largest heavy lift crane vessel (NSCV) for the Netherlands-based Heerema Group. The semi-submersible vessel will be constructed at the newly opened Sembcorp ‘Mega yard’ in Singapore.

The dual-fuel LNG and MGO vessel is due to be delivered in the fourth quarter of 2018 and will be a key asset in the offshore market and a leading player in the installation and decommissioning of offshore facilities. It follows another significant Heerema project, the delivery of the LR-classed Aegir deepwater construction vessel (DCV) in 2013 (see article in the January 2014 Horizons).

The NSCV project, which has a contract value of around $1 billion, is further strengthened by the involvement of the Dutch crane specialist Huisman which will fabricate two tub-mounted 10,000 tonne cranes for the vessel in their Chinese production facility. 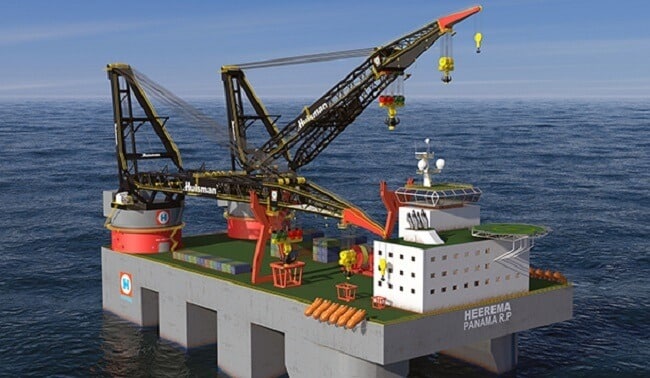 While the vessel is impressive in scale, Heerema are committed to the protection of the environment and will include an Inventory of Hazardous Materials (IHM) and boast a full complement of LR’s ECO notations including NOx Tier III compliance, LNG propulsion and compliance with the ballast water management convention (BWMC) to ensure efficient operation in some of the world’s most sensitive environmental areas.

The state-of-the-art vessel will also have dynamic positioning capabilities in excess of the DP (AAA) standard along with compliance with a range of coastal state requirements including Norwegian Maritime Authority (NMA), UK and USCG requirements which means it will be capable of deep and ultra-deep sea operations on a truly global scale.

Jan-Pieter Klaver, CEO of Heerema Marine Contractors, said: “Our contract with Jurong Shipyard represents the next critical step in our plans to introduce the NSCV to the market. The fact that we decided to press on with our plans in these times of low oil prices, shows our belief in the offshore oil and gas industry and demonstrates our continued commitment to offer unparalleled installation services to the industry.”

Piet Mast, LR’s Marine Area Manager for South Asia, said that this is the exciting next step in the long-running partnership between the Heerema Group and LR. “The Heerema Group is demonstrating its commitment to the marine and offshore industry. With the opening of LR’s new Global Technology Centre in Southampton this complex project is a good fit for LR and is an exciting challenge for the LR team in Singapore who are supported by a range of LR global experts,” he said.

DP World Reports Positive Signs Of Growth In 3Q 2019
Want to share your tips and advice? Got questions? Visit the community forum to ask questions, get answers, meet people, and share your tips!