China Shipping Container Lines Co. Ltd. (CSCL) recently ran sea trials from 17-20 October on what is the world’s largest container ship. The 19,000-teu newbuilding is also noteworthy for being powered by what is, physically, the largest engine ever constructed – a low-speed MAN B&W 12S90ME-C Mark 9.2 type.

The two-stroke engine is rated at 69,720 kW @ 84 rpm although has been de-rated to 56,800 kW.The new container vessel was constructed at Hyundai Heavy Industries, Ltd. South Korea. 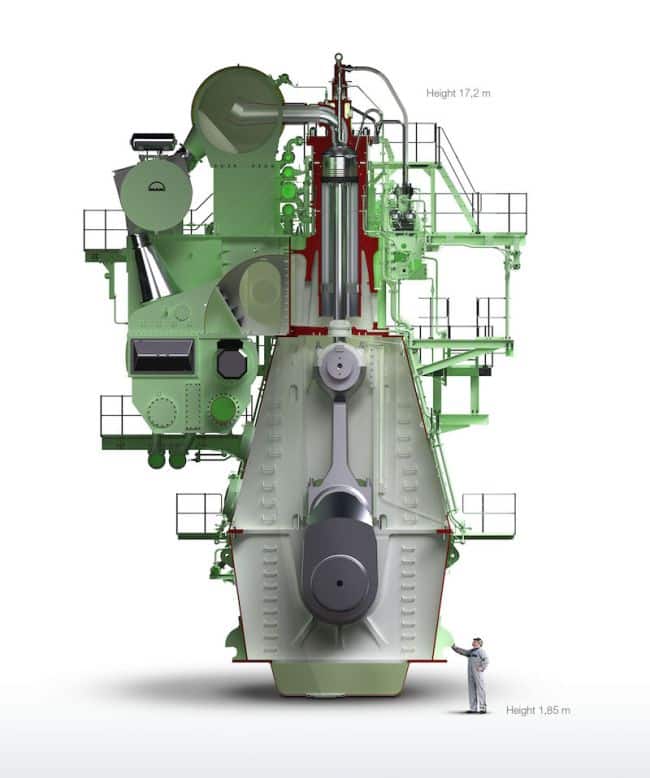 CSCL, based in Shanghai, is one of the largest companies involving in container shipping industry in China. It now operates a fleet of 156 vessels, with an aggregate capacity of over 680,000 teu. CSCL ranks among the top seven of the world’s container lines. CSCL operates on more than 80 routes, covering all the major world and domestic ports with more than 8 million teu shipped annually.

Hyundai Heavy Industries Co., Ltd. (HHI) is the world’s largest shipbuilding company. Headquartered in Ulsan, South Korea, it has seven business divisions, of which HHI-EMD is its engine and machinery division. HHI-EMD is the world’s largest, marine-diesel-engine builder with approximately 35% of the global market share and expects to reach the 150 million bhp production milestone in two-stroke engines during 2015. HHI-EMD is also a leading manufacturer of propellers, cargo oil pumps, ballast water treatment systems and side thrusters.