You are here: Home › Shipping News › One Of World’s First Tests Of High-Speed Diesel Engines With SCR Exhaust System To Be Conducted
TwitterFacebookLinkedInPinterestBuffer

The Rolls-Royce brand MTU and Fairplay Towage are to test an MTU diesel genset with SCR exhaust after treatment in a harbour tug in order to verify compliance with IMO Tier III emission requirements that come into force as of 2016. The nitrogen oxide (NOx) emissions will be cut by 90% compared with the IMO Tier I regulation that was introduced in 2000.

“This is one of the world’s first tests of high-speed diesel engines equipped with an SCR system designed to meet the NOx levels required by IMO Tier III,” said Dr. Michael Haidinger, Chief Sales Officer of Rolls-Royce Power Systems. “We are proud to have this opportunity to demonstrate to our customers a pre-series and cost-saving solution.”

The new Fairplay tug with a bollard pull of 90 tons is currently being built at the Spanish shipyard Astilleros Armon and is scheduled to go into service in the Port of Rotterdam as of 2015. 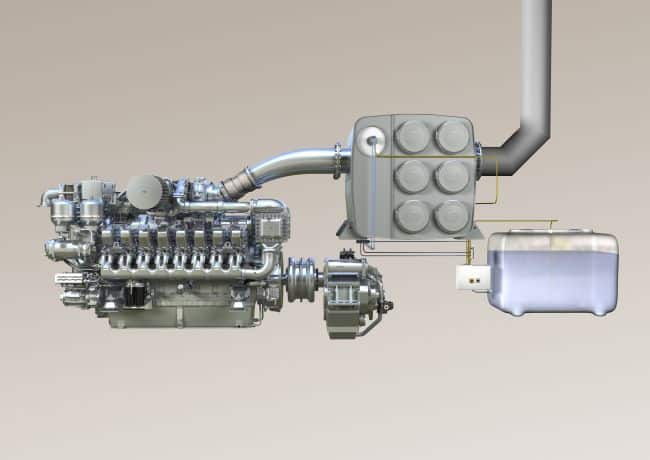 MTU is supplying the two main 16V 4000 M63L propulsion engines, each delivering 2,000 kW, a 16-cylinder 4000 M23F diesel genset rated at 1,520 kW, and the SCR system. The exhaust aftertreatment system, with selective catalytic reduction (SCR) technology, is connected to the diesel genset. As with modern commercial vehicle drive systems, an aqueous urea solution reacts with the nitrogen oxides in the exhaust gas to neutralise them.

The tests on the Fairplay tug, which will run continuously for 10,000 hours, are designed to enable MTU to get ready for the series solution for IMO Tier III marine engines. As of 2016, newly built ships that operate in Emission Control Areas (ECA) in North American coastal waters and in the U.S. Caribbean will have to comply with the NOx limits specified in the IMO Tier III emission standards and the MARPOL Annex VI regulations of the International Maritime Organization.

Fairplay Towage with its registered office in Hamburg is one of Europe’s leading tugboat operators and operates a fleet of around 40 ships in Europe.

The 30-metre long tractor tug is equipped with a combined diesel-mechanical and diesel-electric propulsion system. When entering and leaving the port, the diesel-electric propulsion system with the SCR system will be used in most cases, but will be supplemented by the two main propulsion engines to provide additional diesel-mechanical propulsion when full power is required. The SCR system provides the tug with an environmentally friendly operating mode with minimum emissions in urban areas.