The new container weigh system is a timely innovation, with recent amendments to the SOLAS convention forcing shippers around the world to verify the weight of every export container with certified weighing equipment or processes. The SOLAS rule change has added cost and complexity to container shipping operations, with many shippers having to adopt inefficient or poorly timed weighing processes, such as hauling containers extra distances to offsite weighbridges or weighing every single cargo item before it is loaded into the container. 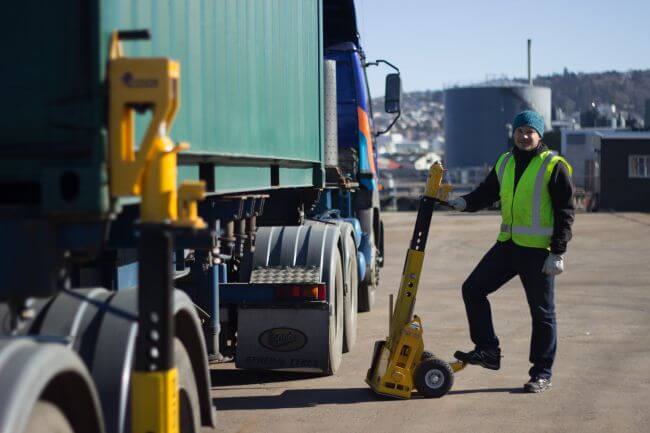 “BISON C-Legs solve this problem,” says BISON CTO, Dr Mark Fahey. “They equip shippers to accurately weigh containers on chassis in any location, without reliance on capital-intensive weighbridges, cranes and container handlers, which are not always available at the right time or in the right place.”

BISON C-Legs are self-contained scales that attach to and lift a container just clear of the chassis, then transmit the gross container weight via Bluetooth to a feature rich smart phone App. The App confirms the container’s weight distribution, captures photos and shipment details and sends weight certificates and related data via email.

C-Legs are compatible with shipping containers of all types and sizes up to 35,000kg and work with both air and spring suspension chassis. Full OIML certification and type approvals in Europe, Australia, South Africa, New Zealand and other countries will be completed by the end of 2016.

“Our ground based container scales have sold well this year and are now being used in over 20 countries to produce SOLAS VGM certificates. However we’ve had strong pull for a similar solution to weigh containers on chassis, especially from Europe and North America where chassis based loading is mainstream. C-Legs really are a market led innovation.”

BISON will mark the C-Leg launch, plus the opening of a new sales office in Europe, by showcasing its weighing hardware and data management systems at the Intermodal Europe exhibition in Rotterdam in mid-November. The BISON team will be based at stand 74. BISON CTO, Dr Mark Fahey, will give a presentation at the conference, talking about the benefits of verifying container weights before they enter the logistics chain.