The Qatari-owned Q-Max vessel is the world’s first low-speed marine diesel engine to be converted to use LNG as a fuel. The retrofit modification meets the current known and future stated global emissions regulations.

Nakilat’s Rasheeda built in 2010 is a 266,000 m3 LNG carrier with two MAN B&W S70ME-C HFO-burning engines, which have been converted to the dual-fuel ME-GI concept. The shipyard operator Nakilat-Keppel Offshore & Marine (N-KOM) carried out the ship’s conversion at its Erhama bin Jaber Al Jalahma Shipyard facilities in the major Qatari port of Ras Laffan Industrial City. 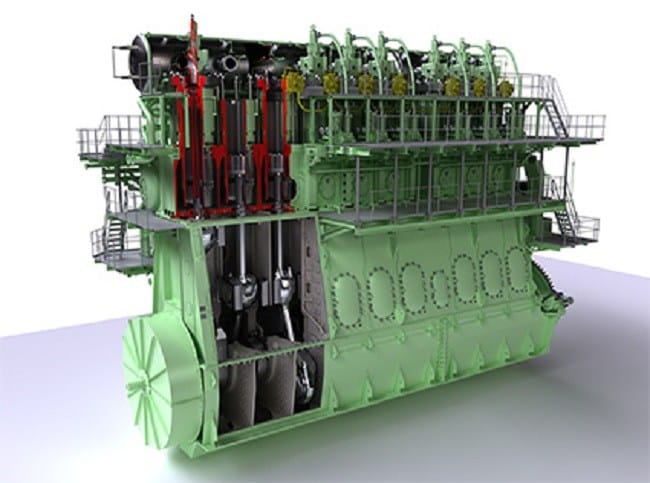 The project collaborators, including MAN PrimeServ, installed the ME-GI system on the vessel at the Erhama bin Jaber Al Jalahma shipyard in Qatar in June 2015. The partner for the ME-GI fuel supply system is TGE.

Christian Ludwig, Head of Retrofit and Upgrades, MAN PrimeServ, said: “This is a fantastic milestone in our company’s history. It is a lighthouse project, and there has been a remarkable partnership and cooperation through this historic conversion. Our ME-GI order book now stands at 140 orders – for different vessel sizes and applications, which we see as a compelling case for our technology to be designated the industry standard.”

Nakilat Managing Director Eng. Abdullah Al-Sulaiti, said, “The success of the ME-GI project is the culmination of years of cooperation with Qatargas, RasGas and MAN Diesel & Turbo as turnkey project manager. In late 2013, Nakilat worked with our charterers to implement a pilot conversion on Q-Max Rasheeda, the first retrofit ME-GI project ever to be implemented in the marine industry. This is a milestone moment for all involved parties.”

MAN Diesel & Turbo reports that the vessel’s ME-GI units have displayed a seamless change between fuel-oil and gas operation – a key characteristic of the ME-GI technology.

The ME-GI engine represents the culmination of many years of work, and gives ship owners and operators the option of utilising fuel or gas depending on relative price and availability, as well as environmental considerations. The ME-GI uses high-pressure gas injection, allowing it to maintain the numerous positive attributes of MAN B&W low speed engines, which have made them the default choice of the maritime community. The ME-GI is not affected by the multiple deratings, fuel-quality adjustments or large methane-slip issues, which have been seen with other dual-fuel solutions.

An ME-LGI counterpart that uses LPG, methanol and other liquid gasses is also available and has already been ordered.