An international joint-venture formed by global trade enabler DP World and industrial engineering specialists SMS group will revolutionize the way that containers are handled in ports. A new and intelligent storing system will be applied for the first time ever at Jebel Ali Terminal 4, in time for the Dubai Expo 2020 world fair.

The High Bay Storage system was originally developed by SMS group subsidiary AMOVA for round the clock handling of metal coils that weigh as much as 50 tons each in racks as high as 50 meters. AMOVA is the first company to transfer this proven technology to the port industry.

Instead of stacking containers directly on top of each other, which has been global standard practice for decades, the system places each container in an individual rack compartment. Containers are stored in an eleven-story rack, creating 200 percent more capacity than a conventional container terminal, or creating the same capacity in less than a third of the space. 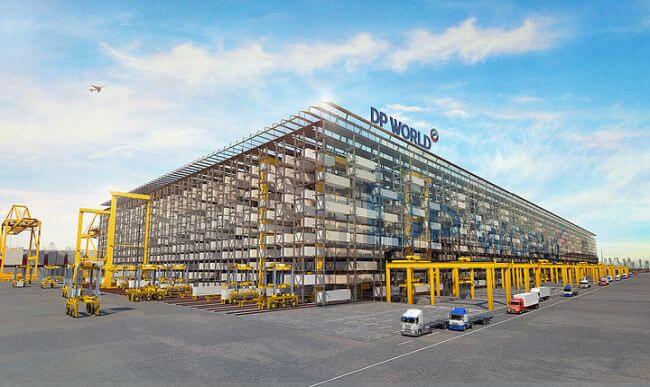 Thanks to the rack´s design, each container can be accessed without having to move another one, enabling 100 percent utilization in a terminal yard. The system brings big gains in speed, energy efficiency, better safety and a major reduction in costs. Costs are further cut by the ability to shorten the time taken to load and unload mega-ships by as much as 30 percent.

Sultan Ahmed Bin Sulayem, DP World Group Chairman and CEO, said: “DP World’s experience and expertise in moving cargo coupled with the technology of AMOVA will ensure the system is remarkably efficient and relevant for present and future operations. As a world first in our industry we are tremendously excited by its potential and groundbreaking features. Our engagement in new technologies is a major priority and we have become known for seeking ways that transform the way goods are moved across the world. Innovation is part of our DNA and at the heart of our success.”

Burkhard Dahmen, CEO of SMS group, said: “Our subsidiary AMOVA has optimized this technology in industrial applications for the metals industry over several decades. The application for container terminals is a direct result of our “New Horizon” strategy, in which SMS transfers technology from the metallurgical sector to other industries.”

Dr. Mathias Dobner, CEO of Joint-Venture, said: “This new container handling technology allows cities to use their expensive and sensitive land and waterfront areas more effectively. Our system will significantly increase the productivity of handling ships on the quay. This means that quay walls can be shortened by a third. This disruptive innovation will greatly improve the financial performance of container ports, and well as their overall appearance.”

Increase Slows, But Still No Relief In Sight For Global Shippers: Xeneta