The first purely battery-driven car and passenger ferry Ampere has won the Ship Efficiency Award in the category Environmental Technology. The award recognizes innovative solutions which have contributed to reducing the environmental impact of shipping operations.

The 80 metre long DNV GL classed vessel is one of three ferries operated by the Norwegian shipping company Norled between Lavik and Oppedal and is able to carry 120 cars and 360 passengers. “Ampere is trading in Sognefjord with 100 per cent regularity and consumes 50 per cent less energy compared with a traditional diesel ferry on the same route. It has proven to be a huge success for Norled,” said Claes Skat-Rørdam of award sponsor Hempel on behalf of the judges. 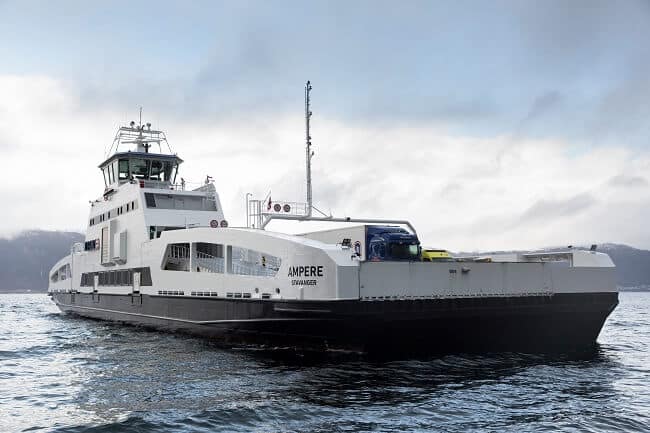 Tord Helland, Finance Director at Norled, accepted the award in London yesterday. “The Ship Efficiency Award is not only recognition for the hard work we have done with our project partners, but it also confirms our efforts and contribution to the global climate goals by reducing air pollution,” Helland said. “An electrical ferry that can save up to one million litres of fuel annually, thereby preventing 2,640 tonnes of carbon dioxide from entering the atmosphere, can make a strong statement in this regard.” Ampere runs 34 times a day with a crossing time of 20 minutes. Between the trips the 1MWh lithium-polymer battery pack on board can be charged in only ten minutes.

“We are honoured that Ampere has received this internationally coveted award,” said Stephen Bligh, Head of Shipping Advisory UK at DNV GL. “As a classification society, together with the shipyard Fjellstrand and the various technology providers, we have helped to make the vision of operator Norled happen and demonstrated that new clean technologies don’t compromise market competitiveness.”

Ampere has been awarded the DNV GL class notation 1A1 LC R4 (nor) Car Ferry C Battery Power. The notation is mandatory for vessels that use batteries as one of their main sources – or the sole source – of energy for propulsion. DNV GL has also developed several services to promote battery and hybrid technology in shipping, such as a guideline for large maritime battery systems, a new tool for qualifying battery-related systems, a battery ready service (technical, economic and environmental performance analyses), battery sizing and optimisation tools and an introduction course to maritime battery systems.