On August 6th, NYK Line, Japan Marine United Corporation, and Nippon Kaiji Kyokai (ClassNK) signed a joint R&D agreement for the commercialization of an ammonia-fueled ammonia gas carrier (AFAGC) that would use ammonia as the main fuel, in addition to an ammonia floating storage and regasification barge (A-FSRB).

Since carbon dioxide (CO2) is not emitted when ammonia is burned, it is viewed to have promise as a next-generation fuel that could mitigate shipping’s impact on global warming. In addition, it is said that zero emissions can be realized by utilizing CO2-free hydrogen* as a raw material for ammonia. In particular, a significant reduction in CO2 emissions is expected to be achieved by replacing coal and natural gas as the main fuels for power generation. 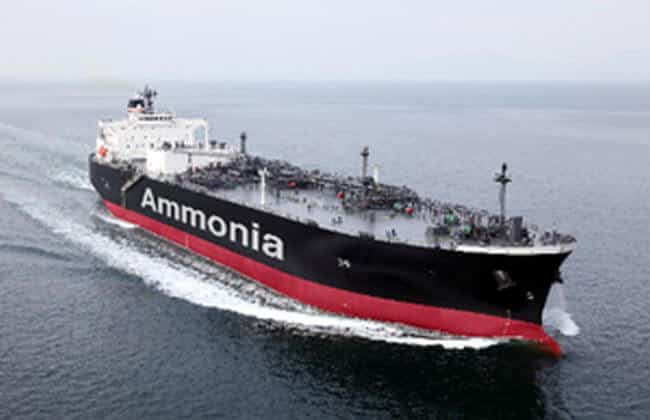 The reduction of greenhouse gas (GHG) emissions is a significant issue in the marine transportation sector. In 2018, the International Maritime Organization (IMO) set the goal of halving GHG emissions from the international maritime sector by 2050 and reaching a target of zero as early as the end of this century.

Ammonia is expected to be used as an alternative fuel for vessels. As demand for ammonia fuel is foreseen to expand, the need for a transportation infrastructure for stable supply is expected to increase. Thus, the companies have decided to start this joint R&D of AFAGC and A-FSRB.

Large-scale marine transportation of ammonia is currently carried out by multi-purpose LPG (liquefied petroleum gas) vessels. In this project, we will be engaged in the R&D of a liquefied ammonia gas carrier. It is expected that the use of ammonia, which is the cargo, as a marine fuel will contribute to the early realization of zero emissions for oceangoing vessels.

In this joint R&D project, we will be engaged in the R&D of a barge** that is equipped with a floating storage and regasification facility exclusively for ammonia for the first time in the world. 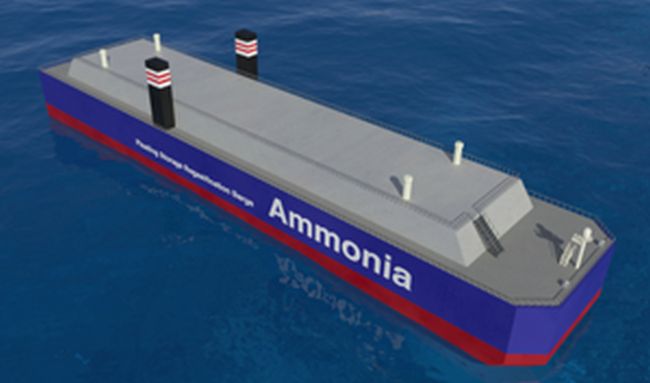 This project is expected to contribute to the early introduction of ammonia fuel by utilizing the barge as an alternative to land facilities (storage tanks, regasification facilities, etc.) for the stable supply of ammonia fuel.

Efforts of each company regarding joint R&D

This joint R&D aims not only to utilize ammonia as a marine fuel but also to establish methods for the mass transportation and supply of ammonia and to become a solution for introducing a mixed combustion of ammonia into coal-fired power stations operated by Japanese electric power companies.

As a result, the R&D is expected to contribute significantly to the decarbonization of not only the maritime industry but also the energy industry.

* CO2-free hydrogen
One way of producing hydrogen without generating CO2 is through the use of renewable energy. A second way is by using natural gas or coal together with carbon capture and storage.

** Barge
A barge is a flat-bottomed vessel designed to carry heavy cargo mainly in inland waterways and ports. Almost all barges cannot navigate by themselves because they are not equipped with an engine; they must be towed or propelled by a tugboat.