Dubbed “Ulysses”, the demonstrator boat 6 meters long inaugurated a few days ago in Concarneau in Brittany (western France) prefigures a catamaran of 25 meters supposed to go to sea in March 2020.

“An extraordinary project,” greeted the French Secretary of State for the Transition Ecologique Brune Poirson, baptizing the boat Friday. “You are the economy of tomorrow,” she added to the four young men between 24 and 30 years behind the project. 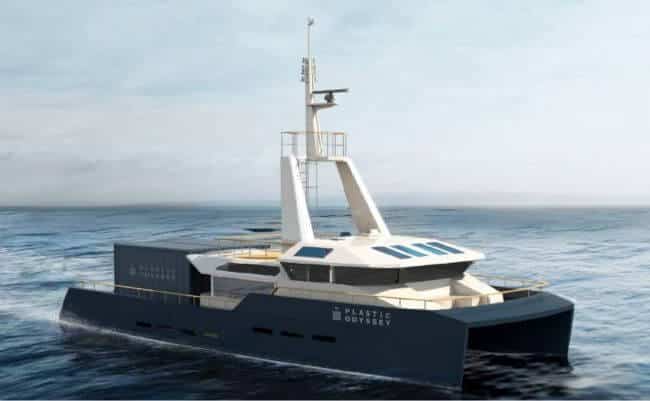 The idea was born a few years ago, in Dakar, Senegal, says Simon Bernard, 27 years old, officer of the merchant navy. “We saw plastic everywhere and people looking for a job to survive, and we thought we needed to make recycling more accessible,” he says. 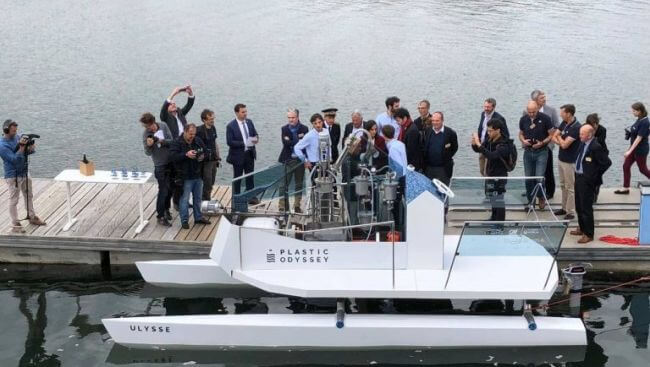 The goal of “Ulysses” is not to clean the oceans, already largely polluted by plastic. Indeed, “once at sea, it is too late: only 1% of plastic waste floats on the surface”, emphasize its designers. “The remaining 99% break down into microparticles and line the seabed”.

“So, how do we make sure that the plastic does not arrive in the ocean? We must turn off the tap,” said the leader of the expedition.

Hence the idea of a boat that, through a journey of three years and 33 stages, will primarily raise awareness of the reuse, sorting and recycling of plastic, including offering free of charge machines for create objects from waste. 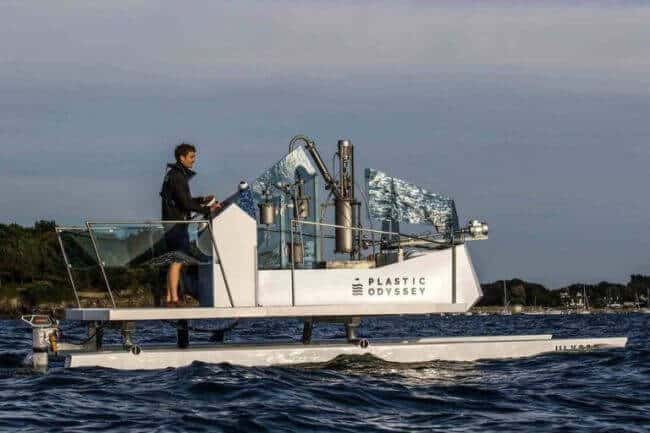 According to the UN, only 9 percent of the nine billion tons of plastic the world has produced were recycled and 12 percent was incinerated. The rest has ended in landfills, oceans, pipelines, where it will take thousands of years to completely decompose.

If current consumption patterns and waste management practices continue, there will be about 12 billion tonnes of plastic waste in landfills and in the environment by 2050, the UN estimates.

“The goal is to provide a kind of Swiss recycling knife” at affordable prices for emerging countries, says Simon Bernard, presenting crusher, compressor, extruder and sorting sensor, which will be offered in Africa, Asia and Latin America where does most of the plastic spilt into the ocean come from?

“You need viable business models so that these machines do not stay in a garage,” he says.

The plastic that can not be recycled will be turned into fuel thanks to the “plastic pyrolysis” and will feed the catamaran for the rest of its odyssey.

Built-in particular to test this plastic-fuel system, the demonstrator Ulysse is also “the first boat in the world to advance to plastic waste,” according to its designers. The prototype has a capacity of 5 kg/hour of treated plastic, for a production of 3 liters of diesel and 2 liters of gasoline maximum.

“We do not promote pyrolysis as the flagship of our expedition but we are convinced that there is a market to develop,” said Benjamin de Molliens, responsible “partnerships” of the expedition.

According to him, the price of “plastic-fuel” should be “competitive or even cheaper than the price at the pump” in countries like Mozambique or Senegal.

The project, with a total cost of 11 million euros, was in its initial phase financed by private sponsors (Clarins, Crédit Agricole, Veolia, etc.). But funds are not yet raised for the construction of the boat, supposed to start in September.

“The hard part is getting started, and now we are on the move,” says Simon Bernard. “We are starting to have people who contact us from all over the world: African entrepreneurs, a Costa Rican researcher …”

Next step: a tour of France with the prototype to promote the project and find funding.

How is Plastic Ruining The Oceans In The Worst Way Possible?