A new fireboat was officially welcomed into service Wednesday at the Port of Long Beach, representing a significant leap forward in protecting the harbor and the flow of trade through the nation’s second-busiest seaport.

In a dockside ceremony attended by 100 invited guests, the fireboat named “Protector” was dedicated in memory of Donald Domenic DiMarzo, a former Long Beach Fire Department captain. DiMarzo served as a fire marshal aboard the USS Intrepid in the Pacific during World War II. He was posthumously awarded the Navy Cross for extraordinary heroism and distinguished service for leading efforts to save the aircraft carrier after an attack that set it ablaze on Nov. 25, 1944. 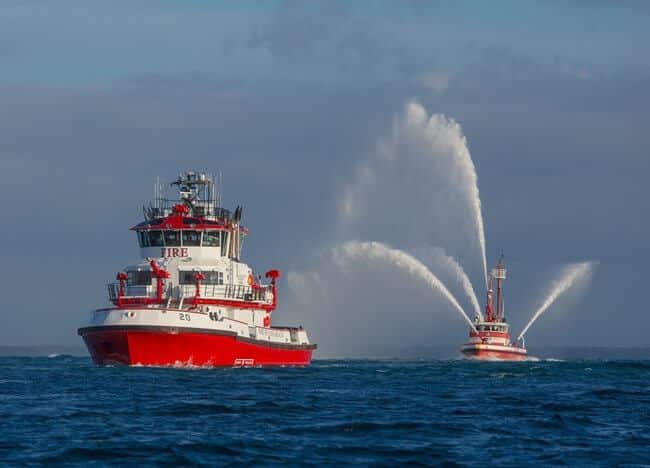 Protector and a second, still-under-construction boat, “Vigilance,” will replace the Port’s fireboats “Challenger” and “Liberty,” which began service in the late 1980s and were designed in an era of vessels carrying 4,500 containers. The biggest vessels calling in Long Beach now have a capacity of 18,000 containers, with even larger ships coming in the future.

Protector is equipped with 10 water cannons capable of extinguishing fires in the harbor or on nearby land with more than 41,000 gallons per minute — four times the output of the existing fireboats. Protector can shoot water the length of two football fields, and higher than a 20-story building, meaning firefighters can throw water or foam anywhere aboard the world’s largest container ships and oil tankers. 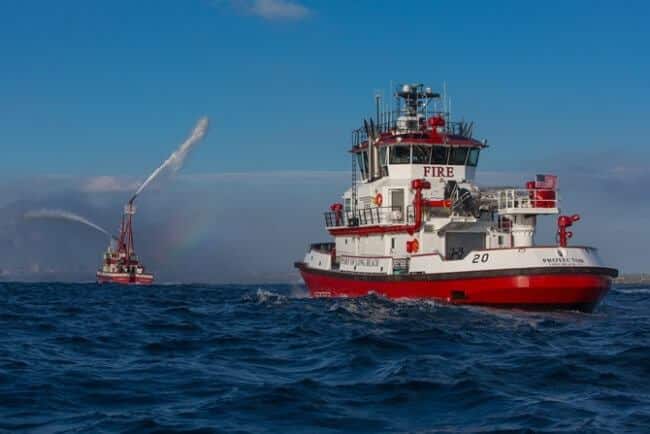 The new, multi-mission fireboats can also assist with chemical, biological, radiological and nuclear threats. Other features include facilities for medical treatment, a command information center, boom deployment to contain spills and an onboard crane.

“We have to be prepared for any potential hazard,” said Harbor Commission President Lori Ann Guzmán. “Protector is a major improvement in our emergency response capabilities, helping us to safeguard both the Port and our community.”

The construction cost is $51.6 million for the two boats, including $18.5 million in grant funding from Homeland Security’s Port Security Grant Program.