Eco Marine Power (EMP) is pleased to announce that it has begun preparing for sea trials of its Aquarius Marine Renewable Energy (MRE) solution in co-operation with strategic partners and ship owner Hisafuku Kisen K.K. of Onomichi, Japan. This preparatory work will lead to the world’s first installation of an integrated rigid sail and solar power system for ships using EMP’s patented technologies including the EnergySail. This is a major step forward towards a more sustainable future for shipping and is expected to result in the wider deployment of EMP’s solutions on ships ranging from coastal cargo vessels to bulk ore carriers and cruise ships.

Currently underway is a feasibility study involving several large bulk carriers including the Belgrano, Nord Gemini and Bulk Chile. For each ship an estimate of the propulsive power that could be provided by an EnergySail array will be prepared according to the routes they operate on. In addition the total amount of solar power that could be installed on each vessel will be determined. On-board testing & data collection will also be undertaken as required. 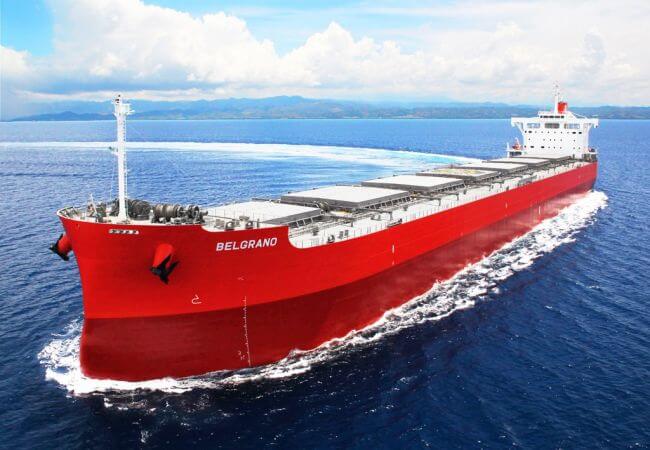 After the feasibility study is completed one ship will be selected for the sea trials phase. During this phase a trial configuration that will incorporate all the elements of Aquarius MRE will be installed and evaluated during a period of approximately 12 to 18 months.

A number of strategic partners are involved in the Aquarius MRE Project including KEI System Co. Ltd., The Furukawa Battery Company and Teramoto Iron Works Co. Ltd. EMP is also in discussions with several companies including potential investors about their possible involvement in the project. Furthermore EMP is interested in hearing from other companies that may wish to be involved during the sea trials phase of the project.

Aquarius MRE is an advanced integrated system of rigid sails, marine-grade solar panels, energy storage modules and marine computers that will enable ships to tap into renewable energy by harnessing the power provided by the wind and sun. The use of these alternative sources of power and propulsion will reduce fuel consumption, lower air pollution and cut CO2 emissions. The rigid sails used by Aquarius MRE are based on EMP’s EnergySail technology. These renewable energy devices can even be used when a ship is at anchor or in harbour. Each EnergySail can be configured with a mix of sensors, photovoltaic panels or other power generation devices. 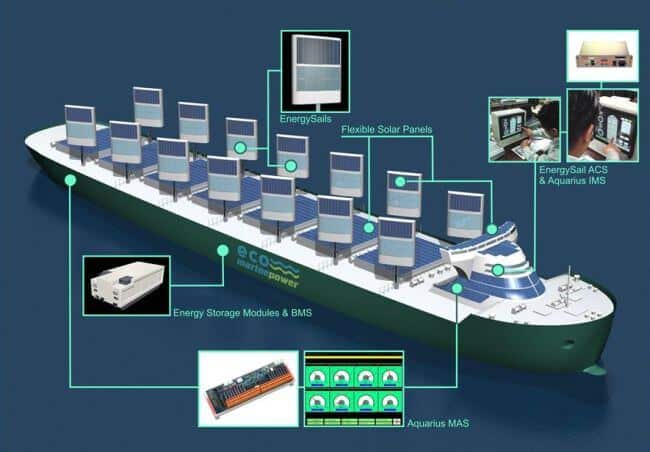 Commenting on this latest development Greg Atkinson, Chief Technology Officer and Founder of Eco Marine Power said, “It’s great that we are able to co-operate with Hisafuku Kisen and we very much appreciate their cooperation in helping us move this important project towards sea trials. We also appreciate the support of our strategic partners and together we believe Aquarius MRE will pave the way to the widespread adoption of renewable energy on ships.”

Mr. Chikashi Yamane, President of Hisafuku Kisen stated, “Our company is pleased to be part of this exciting project which is leading the way towards the use of renewable energy related technologies on ships.”

The production of each EnergySail to be used during the sea trials will be undertaken at the workshops of Teramoto Iron Works in Onomichi, Japan. This company was also involved in the production of rigid sails in the 1980’s and has extensive experience regarding the manufacturing of high quality marine fittings for ships.

Mr. Yoshitaka Teramoto, President of Teramoto Iron Works stated, “Our company is excited to be part of this innovative project that will allow us to showcase our ability to manufacture customized solutions for ships and offshore applications.”