The Golden Ray dismantling operations have now resumed after it had been postponed due to the onset of Hurrican Isaias. The St. Simons Sound Incident Unified Command had previously announced that cutting and lifting activities was to restart following the peak hurricane season.

Prior to the threatening storms, the Unified Command and the team on-site had repositioned and secured equipment safely, to avoid the impact of the Hurricane by implementing the Heavy Weather Plan.

Commander Efren Lopez, Federal on-scene coordinator has expressed the success of the team’s swift and early planning to curb the effects of the storm, saying that it paid dividends. The team is yet to execute certain processes until the scheduled date for cutting and lifting arrives. 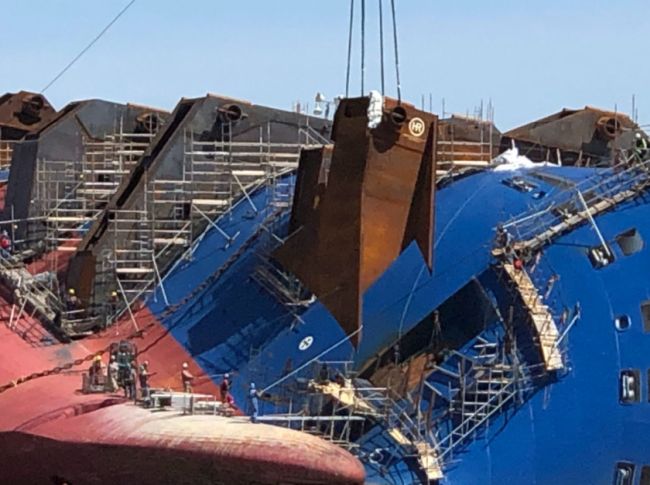 The team continues to prepare for the cutting and lifting of the vessel as on-going operations continue. These include continuous monitoring and maintenance of the Environment Protective Barrier (EPB), scour protection surrounding the wreck site, checking for pollution release and watching the structural integrity of the ship. Training and drills for crew members continue for firefighting capabilities.

Added to this, local sites will also be prepared for large scale removal. Vessel berthing and mooring will be installed as part of preparations. The VB 10,000 heavy lifting twin-gantry crane, now resting in the region will later be moved to the site in the first week of October after modifications.

Just before the incoming storms, the team had been hit with a COVID-19 outbreak that led to 10 positive-tested responders out of 300, of which 50 were quarantined as a result of contact tracing. This made a significant impact on the operations.

However, the CDC guidelines are now being followed by the crew, say officials. Daily health checks, presence of an on-site medic, protective gear, self-quarantining and social distancing are being followed diligently. Sequestered on-water lodging through a vessel at the site to reduce exposure of coronavirus is an on-going operation to be established.

The final phase of the salvage operations will continue for about 8 weeks during fall. The wreck is currently marked stable and is not expected to come in the way of deep water channels or commercial ship traffic.