On 15th May, the World Meteorological Organization (WMO) and the Alfred Wegener Institute, Helmholtz Centre for Polar and Marine Research (AWI) officially announced the start of the international research initiative Year of Polar Prediction. The goal of the two-year project, which involves partners from more than 20 countries, is to comprehensively improve weather, ice and climate predictions for the Arctic and Antarctic, so as to achieve two major milestones: more reliable risk assessments for shipping and other human activities, which will help to avoid accidents; and arriving at a better understanding of how climate changes at the Earth’s poles shape the weather in the middle latitudes.

No-one can say for sure whether the next few days will be snowy or sunny at the North Pole: the weather forecast for the Arctic is far less reliable than for other parts of the world, where an extensive grid of automatic weather stations regularly transmits real-time data on barometric pressure, temperature and wind to the weather services scattered around the globe. Today there’s still very little data to be found at the Earth’s poles, a fact that poses risks for human beings and the environment alike. 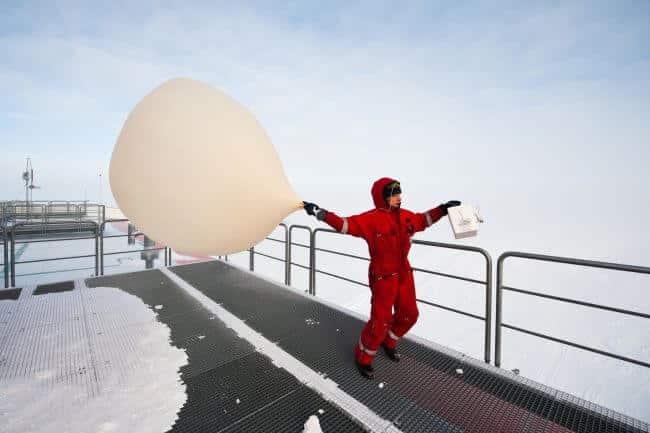 With the research initiative “Year of Polar Prediction” (YOPP), the World Meteorological Organization (WMO), the Alfred Wegener Institute and numerous partner institutions from more than 20 countries hope to address these observational gaps and significantly improve predictions for weather, ice and climatic conditions. Accordingly, in the course of the next two years, experts working at universities, weather services and research centres will conduct intensive measuring campaigns in the Arctic and Antarctic, and will use the resulting data to create advanced weather, ice and climate models.

“We need far better predictions for the ice and weather developments in the polar regions if we hope to minimise the hazards created by the increasing level of human activity in the Arctic and Antarctic. By way of example: less sea ice doesn’t automatically translate into fewer risks for the shipping industry – which is why highly accurate ice and weather forecasts are an essential prerequisite for effective safety management,” explains Prof Thomas Jung, a climate researcher at the Alfred Wegener Institute and Head of the YOPP Polar Prediction Project steering group.

The impacts of climate change are more readily apparent in the polar regions than in other parts of the world. “The Arctic and parts of the Antarctic are heating twice as rapidly as the rest of the world, causing melting of glaciers, shrinking sea ice and snow cover. The impact of this is felt in other parts of the globe – as exemplified by rising sea levels and changing weather and climate patterns,” says Jung. “But right now we still can’t make precise predictions on the future developments, or the scope of change. Here, our climate models still have some serious shortcomings.”

These observational gaps in the Arctic also limit the quality of weather and climate predictions for Europe and North America. “Because of teleconnections, the poles influence weather and climate conditions in lower latitudes where hundreds of millions of people live,” says WMO General Secretary Petteri Taalas. “Warming Arctic air masses and declining sea ice are believed to affect ocean circulation and the jet stream, and are potentially linked to extreme phenomena such as cold spells, heat waves and droughts in the northern hemisphere.”

The “Year of Polar Prediction” is an initiative of the WMO World Weather Research Programme and is being coordinated by a project team at the Alfred Wegener Institute in Bremerhaven. Working in predefined observation phases, the participating researchers will significantly increase the quantity of measurements they take in the polar regions, by e.g. launching weather balloons more frequently, deploying more sensor buoys from research ships, and setting up a range of automatic weather stations during their expeditions on land. These efforts will tentatively be supplemented by various measuring campaigns involving aircraft and satellites.

All observational data will be shared via the WMO Information System – allowing operational forecasting centres around the world to receive the data in real time to feed their forecasts. In addition, social scientists will look at how polar forecasts can be factored into socio-economic decision making, whilst key stakeholders in transport, shipping and tourism sectors will provide input on the practical needs of the user community.

“The scientific and technological advances we hope to achieve in the course of the project will help us better grasp the physical processes at work in the Arctic and Antarctic. Further, we will establish new observational networks that will allow us to make more reliable predictions on weather and ice developments in the future – both on the long-term and short-term scales,” concludes Thomas Jung.