The awards honour those who have offered exceptional levels of welfare services and facilities to seafarers. The International Labour Organization (ILO) hosted the ceremony, which took place after the third meeting of the Special Tripartite Committee of the MLC, 2006.

The evening began with a video message from the ILO Director-General, Guy Ryder. Greg Vines (pictured), ILO Deputy Director-General for Management & Reform who was presenting the awards, then addressed the guests with a short speech. This was followed by speeches from the event’s main funder and Gold Sponsor, respectively – Tomas Abrahamsson, Acting Head of the ITF Seafarers’ Trust, and Drew Brandy, Senior Vice President of Market Strategy at Inmarsat. 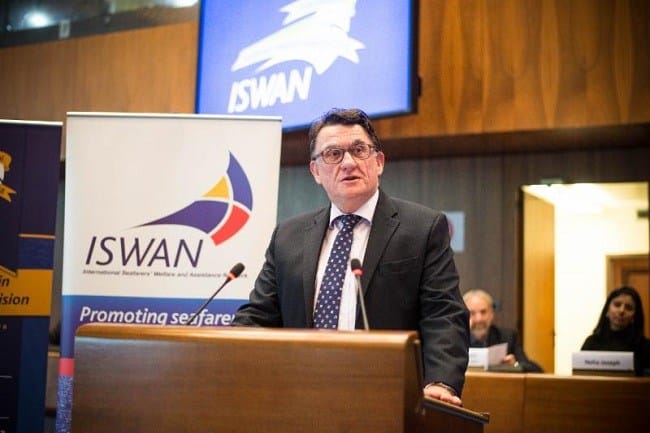 The chair for the evening, MF Shipping Group’s Chief Executive Officer and ISWAN Trustee Karin Orsel, announced the first award of the night. The ISWAN Posthumous Award for Outstanding Services to Seafarers’ Welfare was awarded to Joseph Chacko and Leena Joseph, who tragically passed away in February. Pastor Joseph Chacko was the Regional Superintendent at Sailors’ Society and a trailblazer in seafarers’ welfare, and Leena was a constant supporter of his work. Their daughter, Neha Joseph, accepted the award, which paid tribute to the exceptional difference that Joseph and Leena made to the lives of seafarers.

The Flying Angel Club Fremantle was presented with a certificate of commendation for their continued outstanding services to seafarers’ welfare. Since winning the Seafarer Centre of the Year award in 2014, the centre has increased the transport offered to seafarers and refurbished their accommodation facilities.

Chair Karin Orsel then announced the following winners, chosen by four judging panels formed of experts from across the maritime industry:

Shipping Company of the Year: WALLEM

Wallem previously won the Shipping Company of the Year award in 2014 for its strong support of seafarers’ families as well as excellent on-board communications provision. Since its previous win, Wallem has implemented a Wellness at Sea Programme for all seafarers and continued to improve on-board communications among other new initiatives aimed at benefitting seafarers.

Port of the Year: PORT OF ROTTERDAM

The Port of Rotterdam, together with various other stakeholders, has greatly improved welfare services for seafarers in the area and is working on a number of other future initiatives to continue to provide for visiting seafarers.

Seafarer Centre of the Year: MISSION TO SEAFARERS BRISBANE

The Mission to Seafarers Brisbane welcomes an estimated 12,000 seafarers each year and maximises seafarers’ time ashore with its free on-demand bus service. In addition to its wider stakeholder cooperation, the MTS Brisbane works with students at Queensland University of Technology to help them meet the constantly evolving media needs of seafarers.

Award sponsored by the International Chamber of Shipping

The Nautilus Welfare Fund provides accommodation and care services for some 170 mariners and their dependants. It also provides a one-off grants service to needy mariners across the UK who need essential items or household repairs. This service supports over 300 mariners and generates £800,000/annum in benefits and grants.

Award sponsored by the International Chamber of Shipping

Jasper Del Rosario is a highly experienced and well-trained Sailors’ Society chaplain who is fully committed to supporting seafarers any time of the day or night. He visits seafarers on ships, in hospital, in prison and at home and provides holistic coaching in the Philippines as a Wellness at Sea trainer. He provided exceptional support to seafarers and their families in the aftermath of Typhoon Haiyan in 2013.

ISWAN’s Executive Director, Roger Harris, said after the ceremony: ‘Tonight’s awards celebrate the heroes of seafarers’ welfare provision. It is fantastic to see the exceptional standards of services and facilities being offered to seafarers around the world every time we hold the International Seafarers’ Welfare Awards, and the achievements of this year’s winners set an excellent example to others. We would like to congratulate all of tonight’s winners and thank them wholeheartedly for everything they are doing for seafarers.’