A further discrepancy in the statistics was observed from the figures released by the Tyndall Centre for Climate Change Research, which stood between 31- 42 million tonnes of carbon dioxide. This difference in the statistical count is purported to be on account of the different methodologies utilised to calculate these emission rates.

The CCC has also further indicated that the above mentioned statistics could increase up to 18 million tonnes by the stipulated year (2050), accounting to about 11% of the nation’s emissions of noxious gases. These stark figures, according to the CEO of the CCC, David Kennedy are indicators that the marine sector is not a superficial area to be omitted from the nation’s emission reducing objectives. 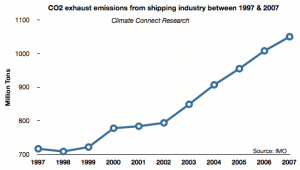 At present, the main reason why the maritime and the aviation sectors have been exempted from the 2050 objective is because of the distinct lack of uniformity in the calculation of emanations. While the government calculates the percentage of emissions on the basis of the sales figure of the vessels’ fuel requirements, the other statistical tabulators take into consideration several other factors like the vessels’ refuelling at other European docks and harbours.

Given the catch in the situation, the CCC has come up with a recommendation of three choices. The first choice involves the complete inclusion of the maritime sector in the stipulated deadline along an inclusion in the already existing budgetary norms for carbon emanations.

The CCC CEO believes that the final choice involves a lot of legalities, allowing it to be treated as a priority to be addressed within the upcoming three months. If the issue of inclusion of the marine sector in the 2050 objective of the United Kingdom is settled with the industry being included in the deadline, it would result in the nation being the first to encompass the maritime industry within the realms of emission control to safeguard the environment.