The slowdown in fleet supply growth for dry bulk ships should result in better diversification in ship sizes (or tonnage balance) over the next few years. This trend will play out as innovative vessel conversions, better fuel efficiency designs and shipyard consolidation become key factors for maritime stakeholders in restoring freight rates to satisfactory levels, according to the latest analysis by IHS Maritime & Trade, a division of IHS Inc. , the leading provider of critical information and insight. 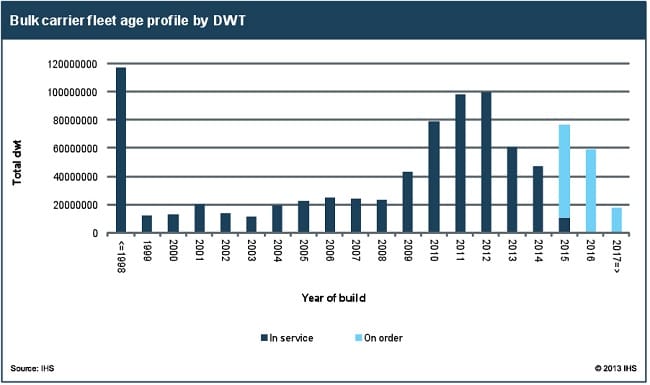 “After a promising 2013, it looked as if the upturn in the dry bulk market would begin early in 2014. However, a slowing Chinese economy led to a fall in the volume of cargo imported. This, combined with the steady flow of newbuilding ship deliveries throughout the year, has put freight rates under severe pressure,” said Richard Clayton, chief maritime analyst at IHS Maritime & Trade. “The Baltic Dry Index, which charts the fortunes of the dry market, hit a historic low level in February 2015. I think this year could be challenging for ship owners.

“The upside of a low dry market is that owners are less likely to order ships. If this continues into the medium term, the prospect for recovery is good,” Clayton said. “On the other hand, investors might use the opportunity of low ship prices to place orders in the expectation of an upturn. There are several variables at play. As always, the key to recovery is maintaining discipline.”

Most of the tonnage that entered the fleet was in the Panamax and Capesize segments, about 40 percent of the total in each category, while there were some noteworthy deliveries in the large Handy and Supramax segments adding up to about 10 percent of their 2014 totals.

IHS Maritime & Trade expects deliveries will show a slight acceleration in 2015 as they were about 40 percent higher (totaling 76 million dwt) than in 2014. If all deliveries come to fruition, this would mean a 10.5 percent total (dry bulk) fleet growth for 2015.

Given the changing environment, shipowners usually look for options to make their investments commercially viable and weak markets provide an incentive for innovative vessel conversions and designs that improve fuel and operational efficiency. This could lead to improved charter rates and so help the market to rebound, the IHS analysis says.

“Energy-efficient designs offer a competitive edge in a depressed market, helping to develop a two-tier structure,” Clayton said. “Ships with fuel-efficient engines and improved operating capabilities will be able to negotiate better rates than their older counterparts. While the price of bunkers is low, the difference in rates is not so significant, but increasing demand in future will favour modern vessels.”

In 2015, IHS Maritime & Trade sees a significant number of completions in the Ultramax class (64,000 dwt), with about 280 vessels. Among these deliveries are modern designs such as the first of the series of four sisters built to Tsuneishi Shipbuilding’s TESS6 Aeroline design. They will be fitted not only with new technology for reducing wind resistance but also with new propellers for lower vibration and higher propulsion efficiency.

At the smaller end of the market, 75 orders for the 38,000 dwt Handysize vessels are being built at Chinese shipyards using the Green Dolphin 38 design. The hull is designed for optimal fuel efficiency without compromising strength and operational flexibility.

In the larger sizes, Mitsubishi Heavy Industries has developed a bulk carrier vessel design that offers reductions in carbon dioxide emissions by about 25 percent compared with conventional bulkers.

Tough market conditions are also encouraging shipowners to seek new ways to operate their fleets, even negotiating with competitors with a view to mergers and cooperation.

One example of this has been discussions between five dry bulk ship owning groups to create Capesize Chartering, a way to secure more favourable chartering terms while reducing costs, the IHS analysis says.

“Putting pride aside, consolidation and collaboration are tried and tested ways to weather the challenging times,” Clayton said. “Shipping alliances such as Capesize Chartering help owners to take control over supply and demand in the short term by positioning their vessels to increase freight rates until the market picks up.”