You are here: Home › Shipping News › Watch: Suez Canal Dredging And Tug-Boat Crew Celebrates After Freeing MV Ever Given
TwitterFacebookLinkedInPinterestBuffer

As the grounded Suez Canal ship Ever Given is refloated and continues its journey, the dredger crew of the canal recollects the event.

Mohammad Ahmad, the dredger crew member who is serving the Suez Canal for the longest time, termed this as an astonishing event. The experience of freeing the ship was unlike anything he encountered in his 30-year career. He has served 25 years on the vessel Mashour but hasn’t witnessed something like this, ever in his life

The ship which blocked the canal for almost a week was freed around 3 pm on Monday. It was almost as tall as the Sydney Opera House, making it difficult.

“I worked on every part of the Canal during my career. Traffic never stopped for a single day,” said 56-year-old Ahmad.

They got to work to free the ship just after the day it ran aground.

“We went on little sleep. Most ships would be out in two hours. This took days,” he said.

“The work was gruelling but the effort was worth it. This was the most important work I had ever done. We all cried from joy when it was finally refloated”, he added.

A video showing the celebratory moments of freeing the ship went viral. The dredger and his crew were seen celebrating the heroic moments of refloating the ship.

“This was a national duty. We are proud to have partaken in it with numerous other team members. It was a group effort,” Ahmad said. 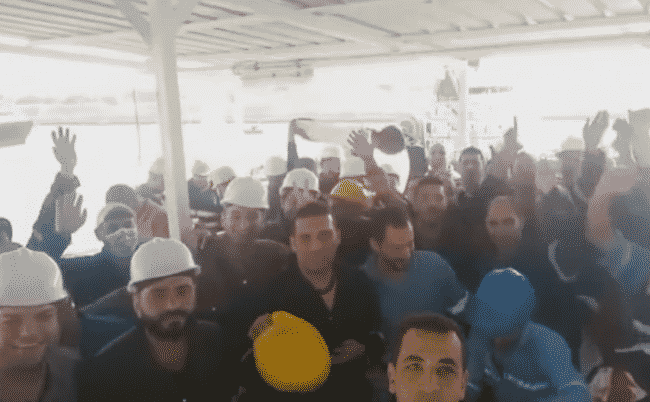 Ever Given is a 400-metre long ship carrying 13000 tons of cargo. The ship had a 16-metre draft. A draft is how deep a fully laden ship sinks in water. Dredgers had to dig the soil underneath to free it.

“The ship was buried three metres into the canal bed which meant we had to dig 18 metres under and around it to dislodge it,” he said.

Extreme precautions were taken so that the dredging doesn’t cause any damage to the ship as it could trap it further.

“The ship could have also slid. Our lives were in danger. But we felt OK with being hurt if it meant the problem was over,” Mr Ahmad said.

The team felt immense pressure as oil prices soared and $9.6 billion of ship traffic a day was held up.

Ultimately when the ship was freed, it was revealed that Dredgers had cleared 27000 tons of sand and mud that was under and around the ship.

The Canal authorities however denied all claims that seek to hold the canal responsible for the grounding. They have maintained that they incurred a loss of $12-15 million in revenue each day because of this blockage and weren’t responsible for the incident.

“The Suez Canal is not to blame for the incident,” Admiral Osama Rabie, the canal authority’s chairman, said on Monday.

“We are the injured party.”