You are here: Home › Shipping News › Watch: Port Of Antwerp To Attempt World’s First Conversion Of Tugboat To Methanol-Propulsion
TwitterFacebookLinkedInPinterestBuffer

June 23, 2021, Port of Antwerp will convert a tugboat to methanol propulsion, a world first. This ‘methatug’ is part of the European Fastwater project, which aims to demonstrate the feasibility of methanol as a sustainable fuel for shipping. The European Commission has given its approval this week. With this world first, the port of Antwerp is taking another important step in the transition to a sustainable and CO2-neutral port.

Because inland vessels must comply with the rules of the CCNR (Central Commission for Rhine Navigation), a derogation from the regulations is required for the methatug. That is why the project was first presented 1.5 years ago to CESNI, the European Committee for drawing up standards in inland navigation, which tugs must also comply with.

It was then submitted to the European Commission, after several rounds of feedback and adjustment. This has now given formal approval so that the conversion of the tug can be started shortly. The methatug is expected to be operational from early 2022. 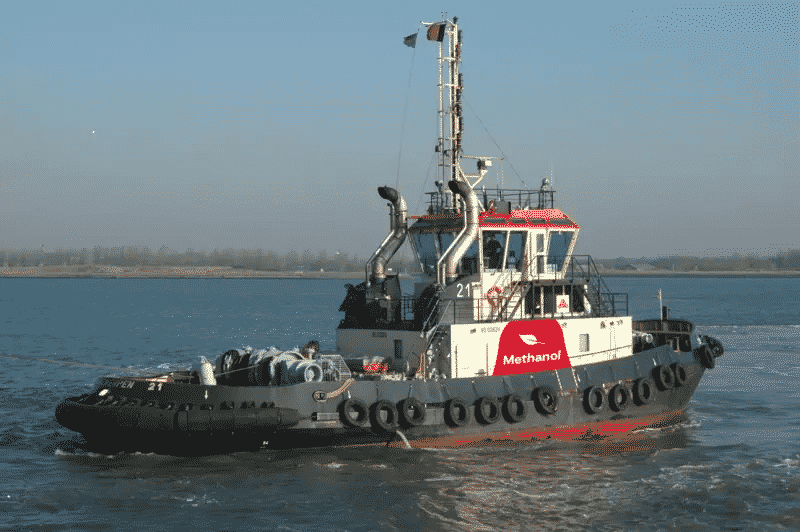 The methatug is part of the Fastwater project, which was set up by a consortium of European maritime research and technology leaders, including the Port of Antwerp. The consortium aims to demonstrate the feasibility of sustainable methanol as a future-proof fuel for carbon-neutral shipping. The project is funded by the European research and innovation program Horizon 2020. As part of the project, Port of Antwerp will convert one of its tugs to a methanol propulsion system.

In addition to Port of Antwerp, which will supply the tug, several other partners are involved in this project. For example, the Belgian engineering company Multi carried out the feasibility study for the project. From the Fastwater consortium, the Swedish company Scandinaos has fully designed the ship, ABC (Anglo Belgian Corporation) is responsible for the conversion of the engine and for the methanol tanks and pipes, and the German Heinzmann is adapting the injectors.

This first is part of an integral greening program of the Port of Antwerp’s own fleet, which systematically strives to integrate the most environmentally friendly available technologies. The port of Antwerp, the fifth-largest bunkering port in the world, has integrated LNG into the bunkering market in recent years. By 2025, the port wants to develop into a fully-fledged multi-fuel port where seagoing and inland vessels can bunker, in addition to conventional fuels, alternative, low-carbon fuels such as methanol, hydrogen or electricity.

Jacques Vandermeiren, CEO Port of Antwerp: “Together with our partners, we are constantly looking for innovative applications and opportunities for the transition to alternative and renewable energy sources. This methatug is the next and important step in the transition to a sustainable and CO2-neutral port, with which we have overcome various technical and regulatory challenges. Thanks to projects like these, we are paving the way and hope to be an example and source of inspiration for other ports.”

Annick De Ridder, port alderman: “Just like with the hydro tub, the hydrogen-powered tugboat, with this project we once again confirm our pioneering role in the field of the energy transition. The ecosystem of the Antwerp port platform is an ideal large-scale testing ground for this.”

CESNI Secretary, Benjamin Boyer: “The CESNI Secretariat is very excited about this modified tug and looks forward to learning from this experience. After all, it would be an important contribution to the ongoing regulatory work to allow methanol as a fuel and thus contribute to the energy transition in inland navigation.”