You are here: Home › Shipping News › Watch Out, That Freighter May Actually Be A Warship
TwitterFacebookLinkedInPinterestBuffer

U.S. military operations now increasingly begin and end at sea – aboard a growing fleet of vessels that the Pentagon has specifically outfitted as floating command facilities, barracks and launch pads.

The daring U.S. commando raid into Libya to capture Ahmed Abu Khatallah, the Benghazi terror suspect, opened a window into Washington’s new approach to war and counter terrorism. The Navy warship “New York” was central to the military’s mission in seizing Khatallah and transporting him to the United States for trial.

“New York” and other “sea bases,” as the military calls them, are more mobile, better defended and potentially cheaper than long-term U.S. facilities built on foreign soil. These ships sail and anchor in international waters, so they offer legal and diplomatic advantages over former land bases.

Some sea-base ships are high-profile military projects costing billions of dollars. Others are civilian vessels that the Defense Department quietly charters, modifies and staffs with non-military crews to function as secretive special operations bases on classified missions. 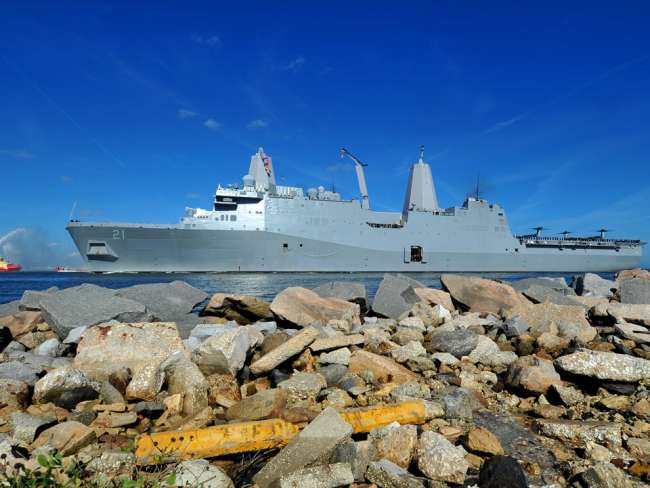 The capture of Khatallah demonstrates what this could look like. When U.S. Special Operations Forces seized him on June 15, the commandos and an accompanying FBI team reportedly traveled by car and then boat to deliver the suspected terrorist to the “New York, waiting off the Libyan coast. The 690-foot vessel then set course for the United States.

Its two-week trans-Atlantic crossing gave FBI agents time to question Khatallah and to read him his rights before they handed him over to law-enforcement officials in the United States. He pleaded not guilty to one count of providing material support to terrorists in federal court in Washington on June 28.

Staging aboard “New York” allowed the Pentagon to avoid complicated legal entanglements. Transporting Khatallah by air from Libya or a nearby country would have required the host government’s approval, as well as approval from all the countries that the plane flew over. Libyan officials objected to the Khatallah raid, but they could not interfere since the suspect was aboard “New York” by the time the news broke.

The technologically advanced “New York” is an ideal sea base. The ship is large and flexible, with an expansive flight deck for launching and landing helicopters, and facilities for handling a wide range of boats. It boasts a wide range of sophisticated communications equipment including radios, encrypted satellite phones and encrypted Internet – plus plenty of living space for commandos and law-enforcement agents. Not to mention rooms that can double as jail cells.

“New York” is not alone. The Pentagon is designing many new ships that include plenty of flexible spaces, multiple ways of getting on board and off and flexible systems that can handle lots of different tasks. Just like land bases – except movable.

Counting older ships and those still under construction, the military has scores of large vessels that can serve as sea bases, each housing potentially hundreds of military personnel, all their gear and their boats and helicopters.

The biggest and most sophisticated sea-base ships are about to enter service. One is “Cragside,” a 633-foot merchant vessel that the Navy leased from civilian shipper Maersk Lines for an initial $73 million in late 2013. The military has been tight-lipped about the vessel’s modifications and missions, but it’s apparent that it’s a sea base for Special Operations Forces – like those who captured Khatallah.

The Navy’s official list of requirements for “Cragside” included secure communications facilities that are specially shielded to prevent electronic eavesdropping, an armory for storing weapons, a gym and accommodations for up to 200 troops plus compatibility with the Navy SEALs’ jet skis and most of the major helicopter types that Special Operations uses.

“This is going to be a seriously capable ship,” said Tim Colton, a maritime consultant who writes about maritime issues.

“Cragside” could have all the amenities of a land base – but with the added advantages of mobility, secrecy and legal cover. Sailing from hot spot to hot spot, the ship could quickly put commandos within striking distance of any coastal country, operating literally below the radar.

“Cragside” could deploy for its first missions late this year, joining the scores of floating prisons, hospitals, supply bases and drone- and helicopter-launch pads that comprise America’s growing sea-base fleet.

They are the mobile infrastructure for a new American way of war – one that avoids the complications of foreign land bases.

The wars in Iraq and Afghanistan ultimately accelerated development of sea bases. Washington and its allies built sprawling, fortified ground bases to sustain the years-long occupations in the two countries. But the bases were expensive, vulnerable to attack and fueled strong resentment in local populations.

“Getting basing rights is tough,” said Lieutenant General Kenneth J. Glueck Jr., head of the Marine Corps’ weapons development command. “We’ve been kicked out of a lot of places.”

The military brass realized it could no longer expect easily available land bases in foreign countries. “Allies are going to want to train with us, but they’re not going to want us to build bases,” said General James Amos, the Marine Corps commandant. “Those days are gone.”

As U.S. involvement in Iraq and Afghanistan wound down in 2009, the Pentagon began pouring more energy into the sea-basing concept.

Between 2001 and 2012, the Navy bought 14 Lewis and Clark-class cargo ships for roughly $500 million apiece. Each of the blocky, 690-foot-long vessels includes expansive flight decks and vast internal capacity – more than one million cubic feet of what the Navy calls “reconfigurable spaces.” These warehouse-style areas have moveable walls that can function as office cubicles for the military – on an industrial scale.

Presaging New York’s mission off Libya, in 2009 one Lewis and Clark-class cargo vessel served as a temporary floating prison for Somali pirates whom the Navy had captured in the Indian Ocean.

Counting cargo ships and amphibious assault ships with innate potential as sea bases, the Navy now has more than a hundred sea-basing vessels – and enough new and improved lighterage, the floating bridges that connect ships, to link together several at a time. The sailing branch is in the process of building as many as four huge new ships that could vastly expand U.S. sea-basing capacity in coming years.

Designated Mobile Landing Platforms, the roughly $500-million vessels are largely raw space, easily transformed for specific, temporary requirements. A flat, featureless deck stretches most of their 840-foot length. The ships can even partially submerge to allow boats to motor onto and off of the deck.

Some of the Navy’s most secretive sea bases are actually older ships that the sailing branch has modified. In early 2012, the sailing branch spent $60 million upgrading the 1960s-vintage amphibious ship “Ponce” – then due for decommissioning – into a permanent sea base.

The 570-foot “Ponce” was fitted out with better accommodations, catapult-launched surveillance drones and extra defensive weapons, including guns and an experimental laser cannon.

“Ponce” could remain in the Gulf for several more years, at which point the Navy plans to replace it with one of the new Mobile Landing Platforms.

The Navy has not said what it intends to do with “Cragside,” the new and secretive commercial ship that the sailing branch is modifying as a home for up to 200 Special Operations Forces. “We can’t provide details relating to the ship’s mission,” military spokesman Jim Marconi told Seapower magazine.

But if in the near future the military needs to capture and transport another suspected terrorist like Khatallah, don’t be surprised if the operation begins and ends aboard “Cragside” or another high-tech sea base.