A Coast Guard aircrew medevaced a fisherman who had reportedly suffered a seizure aboard the fishing vessel Hecate, about 9 miles west of Winchester Bay, Thursday morning.

An MH-65 Dolphin helicopter crew from Coast Guard Air Station North Bend safely hoisted the man at about 11 a.m. and transferred him to waiting EMS at Southwest Oregon Regional Airport in stable condition. 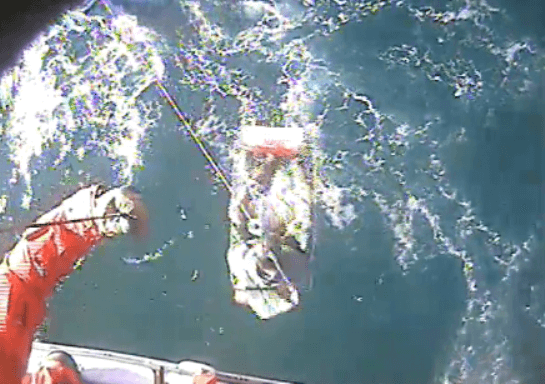 Watchstanders at Sector North Bend were notified of the man’s condition at about 1 a.m., Thursday morning, and coordinated with the duty flight surgeon, who recommended the vessel transit toward Coast Guard Station Umpqua River.

“We had the captain of the boat conferenced in with the flight surgeon and they were going to try and make it to where they could transfer to our small boat,” said Petty Officer 2nd Class Adam Frey, a watchstander at Sector North Bend. “The weather started to get worse and the bars started to get really rough so it was decided that a helicopter hoist was the safest course of action.”

On-scene weather conditions were reported to be 10-mile visibility, 20-mph winds and 15-to-20 foot seas.