The technology group Wärtsilä has been announced as the joint winner in the industry category of the White Snow, Clean Air awards held in conjunction with the 11th Arctic Council Ministerial meeting, held in Rovaniemi, Finland on May 6, 2019. The award is in recognition of Wärtsilä’s solutions that reduce emissions from gas flaring at oil drilling and production sites. 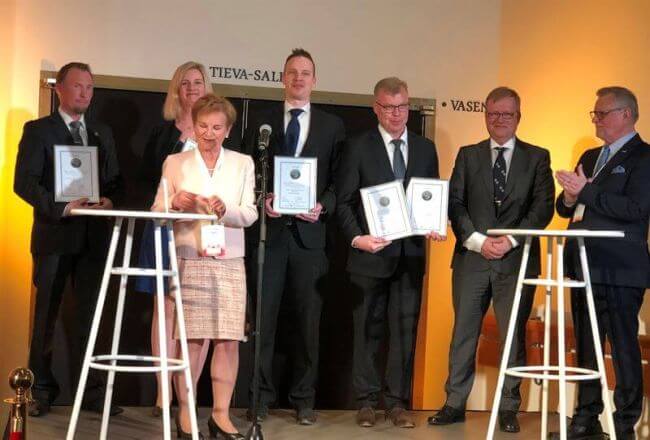 Associated gas from oil production is normally considered as waste and is consequently flared into the atmosphere. It is estimated that globally around 150 billion cubic metres of gas is flared or vented each year, causing some 400 million tons of CO2 in annual emissions. This is equivalent to 30 percent of the European Union’s natural gas consumption.

The award recognises Wärtsilä’s ballistic ignition system, which removes the need for pilot flare. The system delivers a cascade of Zirconium sparks over the flare tip to ignite the gas as and when needed. While the flaring cannot be entirely stopped, the Wärtsilä system significantly reduces the necessity for its use.

Wärtsilä’s flare gas recovery system was also recognised. This innovative product enables the utilisation of recovered gas released during oil production. This associated gas, which is by nature rich in hydrocarbons, can be converted into a methane rich fuel gas for use in Wärtsilä dual-fuel engines.

“At Wärtsilä we have accumulated years of experience in developing systems that limit the use of flaring, or that utilise the gas that would otherwise be flared to produce useful energy. These two systems mentioned are part of our broad portfolio of environmentally sound technologies,” says Timo Koponen, Vice President, Processing Solutions, Wärtsilä Marine.

The competition sought solutions that will decrease and eliminate black carbon emissions in both domestic and industrial processes, and which can be applied internationally. The sponsors of the event were the Climate Leadership Coalition, the Bioenergy Association of Finland, the Finnish Innovation Fund Sitra, the Finnish Environment Institute (SYKE), and the Central Association of Chimney Sweeps.

The other winner in the industry category was Neste for its MY Renewable Jet Fuel, a sustainable aviation fuel produced from 100 percent renewable and sustainable raw materials. The domestic category award went to Nunnauuni, a Finnish company that has developed a burning method producing extremely high temperatures in which wood gasifies evenly and burns efficiently with minimal emissions.

“Warm congratulations for the winners and thank you Climate Leadership Coalition and the other organisers for this initiative. I hope that it will have many followers in Finland and internationally,” said Permanent secretary Hannele Pokka from the Finnish Ministry of the Environment, at the award ceremony.