A total of 16 new gas carrier ships being built in Japan for Japanese owners are to be powered by Wärtsilä dual-fuel engines capable of running on liquefied natural gas (LNG) or conventional diesel fuels. Wärtsilä’s depth of experience and technological capabilities in gas fuelled propulsion solutions, were cited as being key factors in the award of these contracts. The contracts were all placed between the second half of 2014 and December 2015.

The orders specify 20 nine-cylinder, 25 six-cylinder and 16 eight-cylinder Wärtsilä 50DF dual-fuel engines. This total of 61 engines that will be running primarily on LNG represents a notable expansion of Japan’s gas fuelled merchant fleet. These will be the first Wärtsilä 50DF engines delivered for Japan’s LNG carrier market. The first of the Wärtsilä machinery was delivered at the end of December 2015. 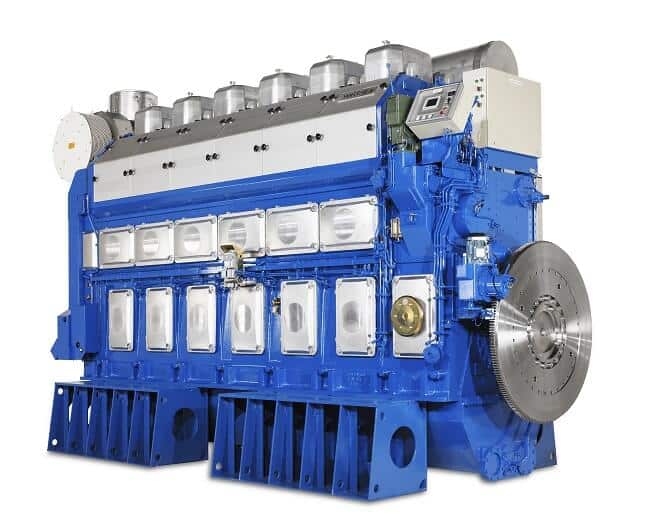 “We at Wärtsilä have always been at the forefront in making it possible, through our technologies, for LNG to become a viable marine fuel. This experience, our unmatched track record in gas propulsion applications, and our well proven dual-fuel solutions are why these contracts were awarded to Wärtsilä. We are honoured and pleased to be making this contribution to Japan’s ongoing shift into shipping’s gas age,” says Lars Anderson, Vice President, Wärtsilä Marine Solutions.

The 16 vessels have a gas cargo capacity of between 155,000 and 180,000 cubic metres. They will be employed mainly in delivering shale gas from the USA to Japan.

One of the reasons for the strong success of this particular engine over the alternatives is its superior propulsion efficiency. The clear environmental advantages that operating on gas allows, is another factor in the success of this technology. When operating in gas mode, the nitrogen oxide (NOx) emissions are at least 85 percent below those specified in the current IMO regulations, and CO2 emissions are some 25 percent less than those of a conventional marine engine running on diesel fuel. Additionally, the sulphur oxide (SOx) and particle emissions are negligible at almost zero percent.

Both the gas admission and pilot fuel injection are electronically controlled. The engine functions are controlled by an advanced automation system that allows optimal running conditions to be set, independent of the ambient conditions or fuel type.