You are here: Home › Shipping News › Warship Collides With Oil Tanker Off The Coast Of Norway
TwitterFacebookLinkedInPinterestBuffer

HNoMS Helge Ingstad was involved in a collision with the Maltese oil tanker Sola TS in Norwegian waters around 0400 this morning (8 Nov) while sailing inner Fjords for navigation training.

Due to the damage to the frigate, it was moved to a safe place and the crew was evacuated in a professional manner. There are no reports of damages or leaks from the oil tanker and no report of serious injuries, though eight crewmembers are being treated for minor injuries. 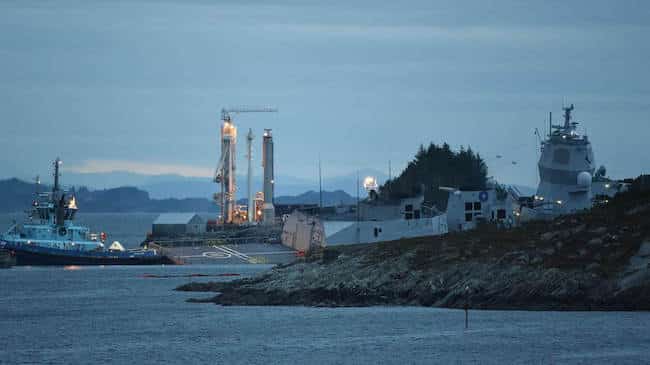 The Norwegian Armed Forces are working with the Norwegian Coastal Authority to address the situation. The Norwegian frigate HNoMS Helge Ingstad is part of the Standing NATO Maritime Group One (SNMG1). The group was sailing in and around the Fjords, following their participation in exercise Trident Juncture 2018 which concluded on November 7th.

The rest of SNMG1’s ships are positioned nearby at sea in the event that further assistance is required.